Justin Bieber’s wax statue is no longer a thing of beauty. Overzealous fans posing for pics with the pop star’s model have done a number on Madame Tussauds’ creation. 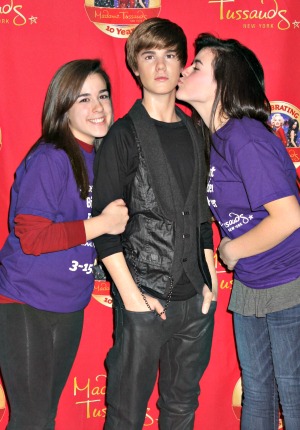 Justin Bieber is heading the way of the Wicked Witch of the West according to Madame Tussauds. Melting under the hot, groping hands of excited tweens, the wax boy wonder that once was a work of floppy-haired art is now off the showroom floor.

The New York Post reports rabid Beliebers looking to pose for photographs with the closest thing they can get their hands on to the real “Baby” singer have done enough unintentional damage that the museum has had to prematurely retire a young likeness of the star.

“With no ropes or barriers to stop them, thousands of fans have had their photographs taken with him since [the statue’s debut] — but it has taken its toll,” a source is quoted as saying about the runaway love situation.

Despite regular touch-ups, Bieber’s wax likeness “no longer does justice either to the star or to the attraction,” and so Madame Tussauds has been forced to remove the figure.

Bret Pidgeon, the wax museum’s general manager, addressed the Bieber meltdown by saying, “This is disappointing, but hopefully we can welcome a new ‘grown-up’ Justin back to the attraction in the near future.”

Can we put in a request now asking Madame Tussauds to take it easy on the realism this time around? The baggy-pants wearing, tattooed 19-year-old hasn’t exactly been role model material as of late. Word broke Tuesday that surveillance video from Bieber’s DUI arrest reveals the increasingly troubled star urinated in his jail cell.