Tom Brokaw is a news legend. But instead of reporting it, he’s become the top story. Tuesday, the anchor broke his silence about his battle with cancer. 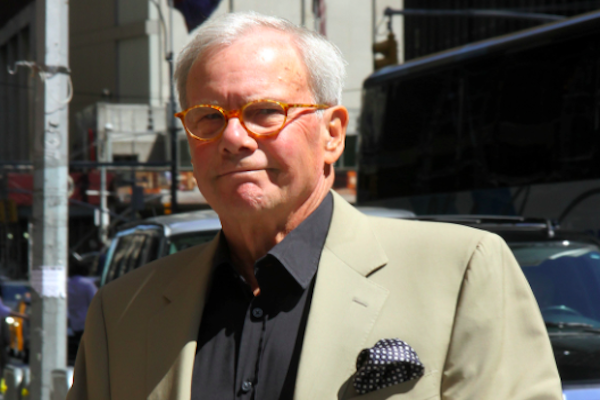 NBC has announced some startling news about one of its longtime contributors. According to the network, Tom Brokaw has been diagnosed with cancer. The 74-year-old learned about his condition back in August after a visit to the Mayo Clinic. According to TV Guide, Brokaw has multiple myeloma, a cancer that affects the blood cells in bone marrow.

Bob Costas out, Matt Lauer in as eye infection gets worse >>

“With the exceptional support of my family, medical team and friends, I am very optimistic about the future and look forward to continuing my life, my work and adventures still to come,” Brokaw said in a statement. “I remain the luckiest guy I know. I am very grateful for the interest in my condition, but I also hope everyone understands I wish to keep this a private matter.”

Kristen Johnston gets a diagnosis for mysterious illness >>

We’re happy to hear that Brokaw is in good spirits. Despite his illness, he has continued to contribute to NBC’s news coverage. He’s appeared on NBC Nightly News with Brian Williams, Meet the Press and even the Winter Olympics, which are currently airing.

Brokaw has been a part of the NBC family for decades, most notably as the managing editor of NBC’s Nightly News from 1982-2004. Overall, he has nearly 50 years of experience in TV journalism. He’s one of the few remaining news authorities that the public turns to in times of crisis.

We wish Brokaw well on his road to recovery. We’re sending good vibes his way.