House of Cards returns on Valentine’s Day! We have three new promos from Netflix to help put you in the mood. 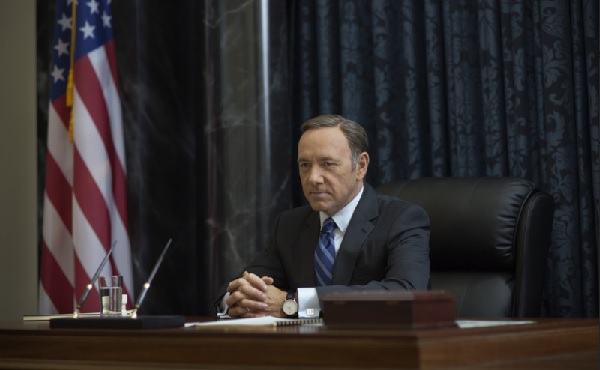 House of Cards returns to us in just three days. Are you ready for Season 2? To help Cards fans get properly worked up for the Feb. 14 release of the entire season, Netflix has released three new promos of what’s ahead. D.C. is about to get darker and sexier and we can’t wait!

Want more Cards sneak peeks? We’ve got you covered with these stills >>

Everyone has their own unique, “humorous” definition of politics. We all know the cliché and cynical definition of a politician is a guy who can talk for 30 minutes without ever saying anything. And then there’s the overused “Latin translation” of “politics” about “many ticks” and blood-sucking parasites. But how does Frank (Kevin Spacey) see politics? As “just shy of treason.” Take a look!

Promo two: Frank prepares for the term ahead

As Frank is sworn in as Vice President, he’s looking back at the path that got him there. “The road to power is paved with hypocrisy… and casualties,” he reminds himself. But he also knows that just because he’s VP, doesn’t mean his war path has ended. He forewarns of an even more interesting season ahead with, “For those of us climbing to the top of the food chain, there can be no mercy.” Could it be that Season 2 will be even more cut-throat and scandalous than last? It sure looks that way.

Yet another teaser for what’s ahead on Season 2 >>

We’ve watched as Frank controlled nearly every aspect of their marriage and public life. For all their years of marriage, Claire (Robin Wright) has had her powerful and calculating husband leading the way and showing her how the game is played. Is she stepping up to the plate to take a swing at the drama now? And whose face is she picturing on the ball?

The entire House of Cards Season 2 releases on Netflix on Feb. 14. We’ll be watching. Will you?

Want more TV news and sneak peeks? Sign up for our newsletter! >>