Rumors have been swirling that Bruce Jenner is having an identity crisis and could be considering a sex change. But what do his sons think about their dad’s appearance? 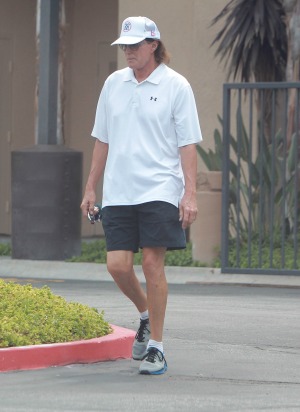 Bruce Jenner may claim he and ex-wife Kris Jenner are doing better on their own and that their decision to separate after 22 years together has been the right move, but fans would disagree.

It appears that since becoming a free man, the 64-year-old star has been suffering from a bit of an identity crisis.

The former Olympic gold medalist recently decided to undergo surgery to shave his Adam’s apple, and his sons Brody and Brandon Jenner are a little concerned about their dad’s recent decision.

According to Radar Online, a source revealed that, “[Bruce] is definitely having a moment…. an identity crisis, according to Brandon and Brody. They attribute it to Bruce finally being out [of] estranged wife Kris’ house…. she never would have allowed him to do this living under her roof.”

In addition to the shaved Adam’s apple, the Keeping Up With the Kardashians star has also opted to grow his hair longer, and rumors have been swirling that Bruce is headed for a sex change — the “laryngeal shave” procedure is typically considered to be the first step in getting a gender reassignment surgery.

However, regardless of whether the rumors are true or not, it doesn’t matter to his sons, and they are allegedly willing to support their father no matter what.

The source continued to reveal, “While the boys haven’t come out and asked their dad if he is transitioning to becoming a woman, it has definitely crossed their minds. However, as long as Bruce is happy, that is all they really care about.”

“Brody has been spending a lot of time with his dad, and the two have never been closer. All they know is that their dad is in a really good place right now, and that is all that matters.”

Bruce’s sons may be happy for him, but there is one person they are supposedly very angry with and that is their stepmom Kris.

“They blame their stepmother for all of the plastic surgery he has had over the years. Kris always encouraged Bruce to have his face nipped and tucked. He has had plastic surgery to remove excess fat above his eyelids. The Adam’s apple surgery is just following in that pattern. [Brandon and Brody are] extremely supportive of the LGBT, and if their dad become part of that community, nothing will change.”

No matter what Bruce decides, we wish him all the happiness in his future.