Her debut single “Trippin’ On Us” is making a meteoric rise in country music, and she’s touring with the powerhouse trio The Band Perry. We’d say rising star Lindsay Ell is destined for big things in country music. We caught up with the cute Calgary, Alberta, native to chat about her hot single, their haunted tour stop and more. 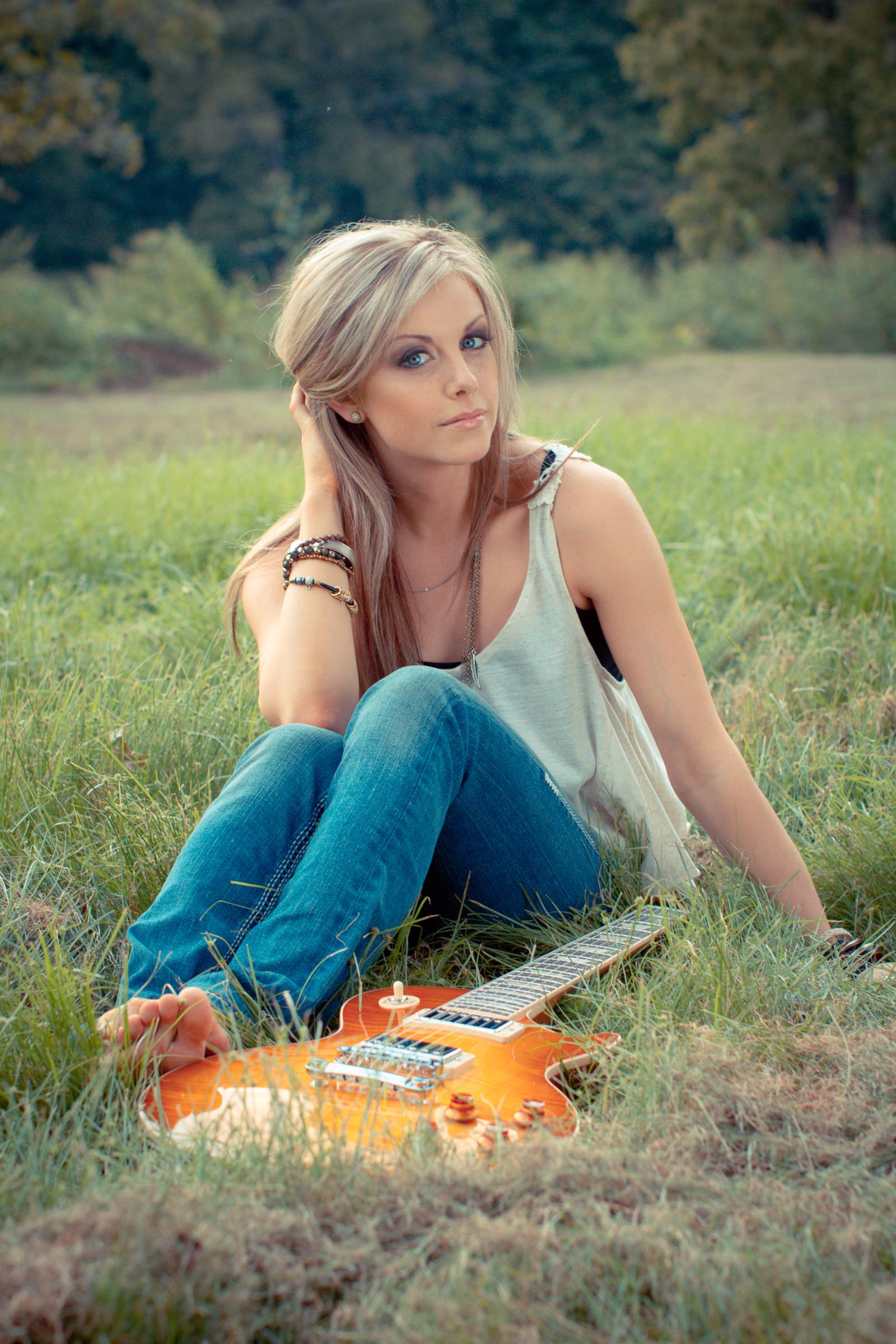 SheKnows: We’ve been listening to your single “Trippin’ on Us” nonstop… it’s so catchy! Did you have any idea when you were working on it that it might be a big hit?

Lindsay Ell: You know, it’s so funny when you write a song, because you never know. Obviously, as a songwriter, you get excited about something and go, “Well, that’s kind of cool… let’s go with that!” But as far as really knowing what’s going to happen, you never do. Sometimes in the studio, you kind of get those chills on your arm and you’re like, “Maybe we have something here.” But you know, at the end of the day, the biggest sort of realization is the fans’ response to it and if people like it. And I am just so happy and humbled to know that people are liking it, which is awesome!

SK: It’s such a fun song. What’s the general feeling you try to convey with your music?

LE: You know, being positive when I’m writing is such a huge focus for me. There’s so much music out there that’s so deep and heavy — not saying there isn’t a good time for darker songs, cause I definitely go there sometimes — but generally, I really like to write positive music. Especially as a female artist coming out, a lot of female artists sometimes write heavier things or man-bashing songs or what it may be, and I just want to write on the happy side of life: being thankful and grateful and, you know, just feeling good. Music is supposed to bring you up, right? So I just hope I can do that for my fans.

SK: You’re on tour with The Band Perry and Easton Corbin now, right? What was your reaction when you first found out you’d be opening for them?

LE: I sure am! It was so amazing. I’ve had a lot of respect for The Band Perry ever since they came out with their first two singles, but having gotten to meet them and tour on the road with them, I’ve just gained a whole new respect for them. Traveling in Europe, we played 20 shows in nine different countries in under 30 days, and the first time I heard they were asking me to come to Europe with them, I was pinching myself like, “Really? Is this really happening?! This is crazy!”

It’s such an incredible experience, and being able to see how hard they work and how dedicated they are to their music and their business… I mean, I’m a workaholic. I work 24-7 — it’s easy to do when you love it so much — but to be able to see an act at their level that’s been doing it for this long and still have that dedication and passion for it is so inspiring. So it’s been a-mazing.

SK: You mentioned the European leg of the tour. Had you been to any of those places before the tour?

LE: No, I hadn’t — it was my first time to Europe completely! So I was like the epitome of a tourist, just taking pictures everywhere I went (laughs). We really got to see some incredible sights… you know, like Munich and Cologne and Germany and Switzerland and Paris and all around the U.K. It was just beautiful. I cannot wait to go back.

SK: Did y’all have any of those crazy “what happens in Europe stays in Europe” kind of tour memories?

LE: Well, we stayed at a haunted castle in Birmingham in the U.K., and we had a couple of days off around Thanksgiving. It was beautiful! It wasn’t that big, so our crew took up the better portion of the rooms, and, I mean, haunted places kind of scare me sometimes… especially when I’m staying in hotel rooms by myself (laughs).

But it was so sweet — you know, they don’t have Thanksgiving over there, and the chef from the hotel cooked us Thanksgiving dinner. The Perrys sent some of their family recipes, like sweet potato casserole and pumpkin pie. So they brought it all and cooked us an amazing dinner, and it was just a really, really special couple of days… while all of us were, like, completely scared out of our senses. (laughs)

SK: I’m not sure everyone knows what an insane instrumentalist you are… and they should. You learned to play guitar at country bluegrass camps with your dad, right?

LE: I did, yeah. I started playing piano actually when I was 6 years old, and when I was 8, I picked up a guitar and I used to go to bluegrass camps with my dad and soak up every ounce of music that I could.

Then, a couple of years later, I met up with Randy Bachman — from you know, BTO, Guess Who, “American Woman,” “Takin’ Care of Business,” the list is long — and the first few writing sessions I had with Randy, he would play all these crazy jazz chords up and down the neck. I’d just sit there like, “Randy, what is that? Those are so cool!” So he got me turned on to a lot of jazz and blues music. You know, listening to Clapton and Stevie Ray Vaughan and Hendrix, and all these other genres that, as a guitar player, I’d never heard of before.

It completely opened up a different world and gave me a different vocabulary to pull from as a musician and as a songwriter, too. So now coming full circle and moving to Nashville and coming back to my roots — the country girl I am — I just have some of these influences sometimes to pull from in a live aspect or in guitar solos or whatever it may be.

SK: You clearly have a bluesy tone to your voice, which has some people comparing you to Bonnie Raitt. Is she someone you listen to? Who’s on your iPod right now?

LE: Absolutely! I mean I still listen to a lot of those guitar players. Hendrix, Stevie Ray Vaughan, Derek Trucks — I listen to them every day. But I do look up to Bonnie Raitt and Sheryl Crow a lot, just for their class while still being very progressive in a musical side throughout their whole career. They’re an inspiration.

And then, I listen to everything from Eric Church to John Mayer to Keith Urban to Imagine Dragons to Katy Perry. As a songwriter, it really inspires me to listen to different kinds of music. You know, when I listen to a country song and then I listen to a hip-hop song and then to alternative pop or whatever, it can give me ideas for different rhythms and things like that that I can then pull into the country arena and, you know, then maybe make it something fresh that country fans haven’t heard before.

SK: You mentioned Keith Urban, who you’ve actually shared the stage with. People are loving him this year on American Idol, so we’ve gotta ask… what’s he like in real life?

LE: He is one of the most down-to-earth and, my goodness, sweetest, real celebrities, I guess I could say, that I’ve ever met. You know, people who’ve had that level of success and who’ve been doing it for that long, they just… I don’t know, you hear that they get jaded or they get into these power trips or whatever, but Keith is just so real. He’s completely down-to-earth, and when you talk to him, you have his full, undivided attention. I’ll never forget the first time meeting him because I was just like, “Wow, that guy is amazing!” Not only do I look up to him on a complete musical level, but as a person he’s just top-notch.

SK: While we’re on the subject of Keith Urban, who is obviously Australian, I wanted to touch on something. He’s clearly a country musician of great success, and you are a young lady from Canada who is shaping up to be a huge country music star. Can you describe what it’s like to be Southern but not be from the South?

The thing that I was struck by when I moved down here is that it reminded me so much of Canada. One, I guess because it’s such a musically rich environment and, growing up in that, it just feels like home. And even just the topography of it in the rolling green hills.

But the Southern hospitality thing… I was like, “People are so nice here!” Canadians are generally pretty friendly, but the Southern hospitality thing is so infectious. The first time I spent a few weeks in Nashville, they were like, “Lindsay, come on over and we’ll cook you dinner and we’ll have a jam session,” and I was just like, “This place is insane; I love it!” So I definitely felt at home right away, and you know I really haven’t looked back ever since. I mean, what’s better than a Southern girl? (laughs)

SK: Well, what do you see next for you? What’s your big aspiration?

So really, in the forefront, it’s just letting as many people hear my single as possible and finding out about who may not have heard about my music before and just playing shows. I’m so grateful to be on the road with The Band Perry — it’s my favorite part of the business, having that one-on-one interaction with the fans every night. Nothing tops it, so I just hope I can keep traveling around the world, playing for thousands of people every night for years and years and years and years and years.