Kathryn goes on a trip to New York, Toby learns he may be single for longer than he thought, things get complicated for Bay and Tank, while Daphne finds out about Sharee’s home life, in “Have You Really the Courage?” 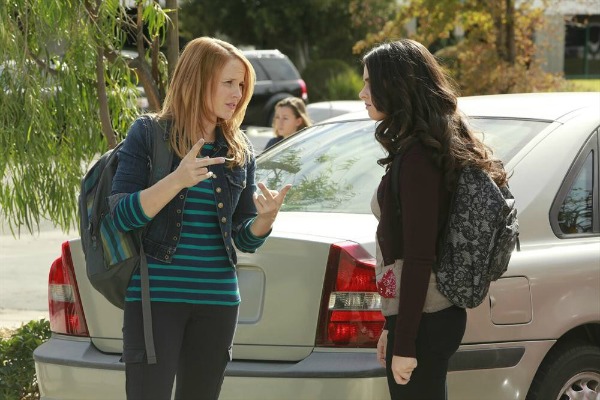 One of the things I really love about reviewing Switched at Birth is the way this show keeps me on my toes. In my review of last week’s episode, I talked about the love triangle that was developing between Daphne, Jorge and Campbell. I was excited to see where that storyline was going, but this week there was no mention of it at all. Instead, Daphne’s story centered around Sharee and the issues she was having with her mother. I know it was the right decision, but I think that Daphne and Regina telling the authorities what they saw is not going to go over well with Sharee. It’s too bad that every time Daphne and Sharee almost become friends, something gets in the way of that.

Bay’s story was so sweet. I thought it was adorable that she hadn’t figured out that Tank liked her and her decision to tell him was a tough one, but she had to do it if that’s what was in her heart. I knew he might take it hard, but did not expect the accident that would suddenly turn him into a hero. I’m guessing that Bay is going to find herself looking at Tank in a new way, which is great. Though of course that will probably mean that Ty will come home and crank up more drama.

Things were already turning a little rotten between John and Kathryn, but this episode clinched it. Regina’s timing was absolutely perfect to catch Jenice and John locking lips. Will it matter to Kathryn that he didn’t return the kiss and never asked for it? I’m thinking not. Between that and her trip to New York and all the book talk, it looks like those two are headed for a lot more problems in their marriage. I can’t imagine that they would get divorced, but it is scary how far things are deteriorating with them.

As for Toby, once again he had a rough go of it. I thought it was so nice of him to think of Nikki as he was putting together his apartment, but if she’s going to be gone awhile, then maybe John was right to tell him to embrace the single life. He’s never lived on his own so maybe he can enjoy some time to just be himself before living with someone else. Though, if things don’t go well back at home, Toby might find himself with a new roommate: His dad.

Switched at Birth Season 3 Episode 3 review: Toby strikes out on his own >>

Toby suggested the best way to clean a pan was to set it on fire. Wait. You mean that doesn’t work?

Daphne pointing out that Tank liked Bay, and not as a friend. The fact that Bay hadn’t picked up on that was just too cute.

Bay claiming she played field hockey to get into art school. I bet she never saw that as an asset.

Bay trying to bribe Toby with a cactus.

“You can’t be scared of the ball or the ball will know.”

Renzo convincing Daphne to go out for a night on the town.

Bay in her goalie gear.

Kathryn’s reaction to finding out that she was being checked out by a woman.