This remake of a classic dating comedy chronicles two couples from the bar to the bedroom. We sat down with Kevin Hart and Regina Hall and could barely keep it together!

Both Kevin Hart (This is the End) and Regina Hall (Scary Movie) have a strong comedy background, as compared to the original stars of About Last Night, which is based on the David Mamet play Sexual Perversity in Chicago.

This is the End movie review: Doomsday Laughers >>

In 1986, brat-packers Rob Lowe, Demi Moore, James Belushi and Elizabeth Perkins starred as the lead couples trying to find romance in the big city, but mostly finding things to fight about.

With all the screaming going on in the film, we asked if either actor lost their voice.

“I didn’t actually,” said Hart, “But Regina has a man’s vocal chords. Most women can’t go that long screaming, so thank God she comes from a different background of vocal chords of aggressive men. She did a good job.” 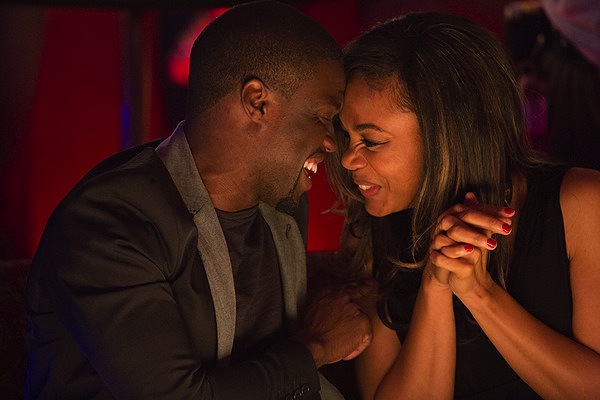 Hall said, though, she didn’t lose her voice during this movie, she had lost it before while working, including during the filming of Hart’s TV show. Hart claimed he tried to get her fired. Here’s how Hall responded:

“I told Kevin I had been diagnosed with bird flu,” she said.

Hart replied, “Do you know what rhymes with bird flu? A little thing called cocaine.” What? “It sounded like someone had a long night to me,” said the comedian who clearly knows how to get a rise out of his co-star.

Most anticipated movie couples of 2014 >>

With so many awkward and hilarious moments in the movie, we wanted to know how the actors kept a straight face during shooting. Hall laughed and said, “Well, I didn’t allow it to get unstraight.”

Hart piped in, saying “She’s the master of straightening faces.”  To prove it, she challenged Hart to make her laugh. So what kooky outbursts did the wisecracker throw at her? Jokes about her boobs, of course!

“Regina got some big tittays! Regina’s areolas are the size of her back,” were just some of the things he said to Hall. Watch our video to find out what made her finally break and crack a smile.

About Last Night opens in theaters on Valentine’s Day.