Michelle Obama is balancing raising two children while in the spotlight. She decided to offer some other very famous parents her tips on raising their child. 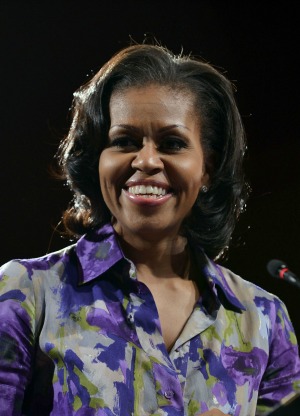 It seems that everyone has an opinion on Justin Bieber‘s recent legal issues, as well as what to do to fix him. First Lady Michelle Obama is the latest to offer her advice. But instead of giving the Biebs himself her words of wisdom, she is offering his parents her thoughts.

“I would pull him close. You know, I don’t know if it would be advice as much as action,” she offered (via People). “I would be very present in his life right now. And I would be probably with him a good chunk of the time, just there to talk, to figure out what’s going on in his head, to figure out who’s in his life and who’s not.”

Bieber’s problems include a raid on his home, an arrest for an alleged DUI and a search of his plane for reports of drugs, among many other issues in past months. The singer is over the age of 18, but growing up as a teen idol has obviously left him with some issues he needs to work through. Obama said that even at his age, he still needs the love and support of his parents.

“I found that to be the case with my kids,” she said, speaking of her two daughters, 12-year-old Sasha and 15-year-old Malia. “They just want you near, you know — they want that advice from a parent. They want to see you on a daily basis, because the thing is he’s still a kid. He’s still growing up. So, I would pull him close.”

Miley Cyrus to Justin Bieber: “Pay people” to stay out of trouble >>

With his recent run-ins with the law, someone started a petition on the White House website to revoke Bieber’s green card. It has reached well over the required 100,000 votes. White House Press Secretary Jay Carney said President Obama will respond to the petition soon.