In the ultimate Illuminati pairing, Beyoncé and President Obama are being accused of getting hot and heavy. Do Michelle and Jay Z know about this? 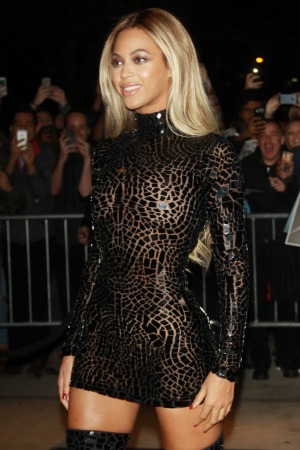 A French reporter told a radio show that Beyoncé and President Obama are totally getting it on. So is the “Drunk in Love” singer actually riding Obama’s surfboard?

In a report published by conservative French newspaper Le Figaro, award-winning photographer Pascal Rostain claimed in an interview that Queen B and the prez are totes engaging in Illuminati mating rituals.

Blue Ivy gets her party on with Michelle Obama >>

“You know, at this time, the United States, there is something big that is happening… Besides, it’ll go out tomorrow in The Washington Post, we cannot say that it is the gutter press [reporting on an] alleged affair between President Barack Obama and Beyoncé. I can assure you that the world will talk about it.”

Rostain, who claims a close friendship with former French First Lady Carla Bruni, says his “proof” comes from the fact that Michelle Obama is the victim of Resting B**** Face and that the first couple has been acting “a bit distant” lately.

But The Washington Post actually has no plans to run such a story, with spokesperson Kris Coratti telling Poynter.org that Rostain’s statement is “definitely not true.”

Beyoncé and other epic celebrity photobombs >>

The timing of the comments is curious, as French President François Hollande is due to visit the U.S. this week amid a scandal that saw him separate from first lady Valérie Trierweiler to date a much younger actress.

After being called out by the Post, Rostain is backpedaling on his statement — a little it.

We’re pretty sure that while Jay Z may still have 99 problems, Obama ain’t one.