Marc Anthony and his girlfriend of one year, Chloe Green, have split up due to supposed busy schedules on both sides. 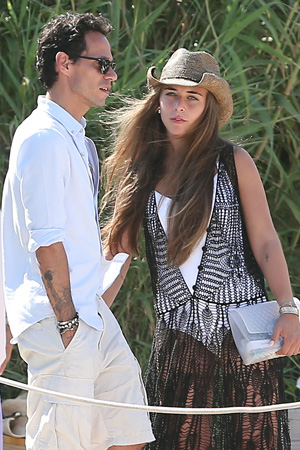 It’s over for Marc Anthony and his girlfriend Chloe Green, who is 23 years his junior, after the couple cited that their busy schedules are to blame for the end of their one-year relationship.

The former Mr. Jennifer Lopez, 45, and the 22-year-old British heiress apparently can’t find the time to be together to continue their relationship, Us Weekly reported. “They are taking a break. It is because of busy schedules,” a source told the magazine.

The pair dated for a year with no sign of relationship troubles and was seen together as recently as the end of January. Anthony and Green were spotted holding hands on the red carpet of the Grammy Awards on Jan. 26, and looked quite happy to be together. They were even seen getting very affectionate once inside the auditorium where the awards took place.

Early on in their relationship, Green was already spending time with Anthony’s small twin children, Max and Emme, 5, having a special family day with them at Disneyland last February. The new lovebirds were said to look very happy to be together at the time.

Meanwhile, Anthony’s ex, Jennifer Lopez, has also snatched a younger mate for herself, having been dating Casper Smart, 26, since November 2011. Lopez began her relationship with the dancer-choreographer shortly after she split from Anthony in July 2011.

Anthony and Lopez have yet to finalize their divorce, as the returning American Idol judge did not file her papers until two years after their split. The former couple only share the twin children, but Anthony has two other older sons, Cristian, 13, and Ryan, 11, with his ex-wife, former Miss Universe Dayanara Torres.

Prior to being with Green, Anthony dated model Shannon de Lima, who he started a relationship with shortly after his split from Lopez. The two broke up last January, right before he began dating Green.