Nadezhda Tolokonnikova and Maria Alyokhina have been kicked out of Pussy Riot for selling out to the man. 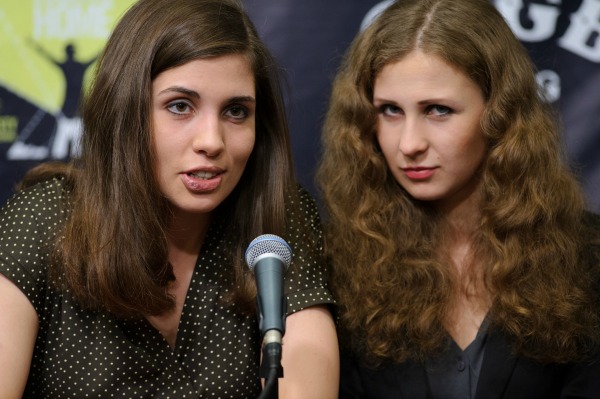 The six remaining members of Russian punk band Pussy Riot have said they are left with no choice but to kick Nadezhda Tolokonnikova and Maria Alyokhina out of the band.

In a blog post on the group’s LiveJournal page that was translated by The Guardian, the other anonymous band members said that Tolokonnikova and Alyokhina have cut off all contact with the band since being released from a Russian prison and that their new brand of activism is too commercial for the rest of the band to swallow.

Green Day voices support for Pussy Riot at the VMAs >>

“We are very pleased with Masha and Nadia’s release. We are proud of their resistance against the harsh trials that befell them, and their determination by all means to continue the struggle they had started during their time in the colonies.”

“Unfortunately for us, they became so carried away with the problems in Russian prisons that they completely forgot about the aspirations and ideals of our group — feminism, separatist resistance, the fight against authoritarianism and personality cults, all of which caused their unjust punishment,” they explained.

“Moreover, instead of the names Nadia and Masha, the poster of the event showed a man in a balaclava with an electric guitar, under the name Pussy Riot, while the organizers smartly called for people to buy expensive tickets.”

“All this is an extreme contradiction of the very principles of the Pussy Riot collective: we are an all-female separatist collective — no man can represent us either on a poster or in reality. We are anti-capitalist — we charge no fees for people to view our artwork, all our videos are distributed freely on the web, the spectators at our performances are spontaneous passersby, and we never sell tickets to our ‘shows.'”

Tolokonnikova and Alyokhina were convicted of “hooliganism motivated by religious hatred” because of a performance at Moscow’s Cathedral of Christ the Savior during which they filmed the protest video Punk Prayer — Mother of God, Chase Putin Away!

Tolokonnikova and Alyokhina were sent to prison in 2012, and their harsh sentences were protested by humanitarian groups around the globe. They were released after 21 months amid huge international pressure.