Jake Gyllenhaal has tackled some intense roles lately. In his new film, Enemy, he plays two characters with the same face but very different lives. 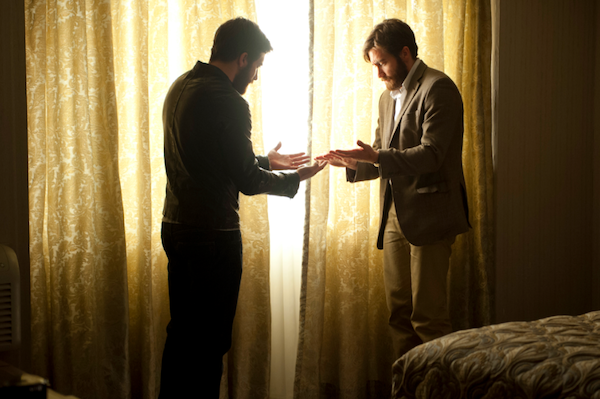 Jake Gyllenhaal pulls double duty in his latest film, Enemy. The Oscar-nominated actor reunites with Prisoners director Denis Villeneuve for this psychological thriller. In the film, Gyllenhaal is in a battle that takes him on a twisted journey that terrifies and intrigues him.

Jake Gyllenhaal hospitalized after taking a scene too far >>

Enemy centers on a quiet college professor named Adam, who stumbles across his real-life double. While watching a film, Adam notices an actor who bears an eerie resemblance to him. The actor’s name is Anthony Claire, and he looks like Adam in every way. Shocked by this discovery, Adam decides to learn more about his doppelgänger.

Once the men meet face-to-face, they engage in a complex and dangerous struggle. They slowly but surely become part of one another’s lives. This changes their dynamic, causing a rift so strong that they can no longer coexist. Are they twins, cousins or just strangers who happen to look alike?

One of the most interesting parts of the trailer is a shot of one of the men’s mother, played by Isabella Rossellini.

She states, “You are my only son. I am your only mother.”

If that’s true, there has to be a reason why there are two doubles walking around.

Watch the trailer for Enemy below

Enemy will definitely force you to put on your thinking cap. The film is currently available on DirecTV and opens in theaters on March 17.