Love is in the air! We’ve got a crush this Valentine’s Day on The Vampire Diaries‘ couple Caroline and Klaus. 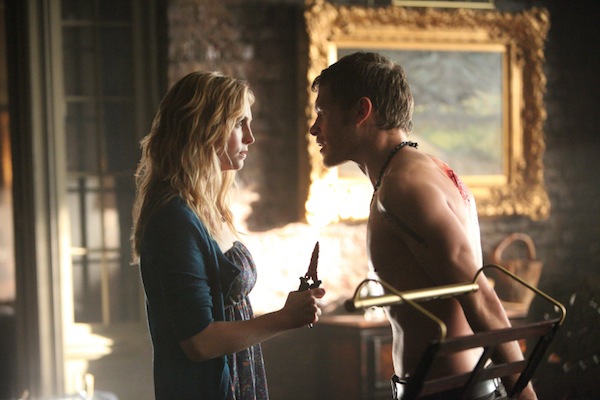 It’s so wrong, yet so right to love Klaus (Joseph Morgan) and Caroline (Candice Accola) together on The Vampire Diaries. Fans were finally rewarded for their fervor over this pending relationship during the 100th episode when they translated their emotional chemistry to the physical.

The big obstacle in the way of their happily ever after is that Klaus has gone off to star in his own show, The Originals, leaving Caroline to deal with Tyler’s recent return to The Vampire Diaries. In case you haven’t already caught on, we’re not Tyler fans.

Because they’re now on two different shows, Caroline and Klaus’ relationship is putting on the brakes for now, but we have five great reasons we think their love was made to last.

1. There’s a fine line between love and hate

Caroline started her relationship with Klaus by hating him. Then that hate festered into an unshakable frustration that left her with Klaus on the brain all the time. Her thoughts of him only evolved from there.

Klaus, on the other hand, has always had a thing for Caroline, though he’s equally as frustrated by her, but the original vampire has had quite a few distractions along the way to keep him from wholeheartedly pursuing Caroline. It’s just a case of the right time not presenting itself just yet.

2. Caroline needs a man, not a boy

She’s an independent woman with her own goals and aspirations. Being a vampire hasn’t stopped her from pursuing her very human dreams. She’s a type A but also knows how to let loose, which is where Klaus falters. Klaus could use a constant, healthy dose of humanity to balance out his need to rule with an iron fist.

3. Klaus needs someone to put him in his place

Klaus makes a lot of dumb decisions. He needs a woman he loves more than he hates hearing he’s wrong. Caroline, unlike so many others, isn’t afraid to tell Klaus when he’s making a bad decision. She stands up for herself and her friends with valid opinions. Since Klaus will never listen to Elijah’s sound advice, it’s got to come from somewhere he’ll actually hear it. Caroline might be the only person with the true potential to get through to Klaus.

Eternity is a long time to spend with someone, but an even longer time to hold a grudge. Klaus has hundreds of years to dedicate to earning forgiveness for his bad deeds against Caroline and the rest of The Vampire Diaries‘ gang. He may not have met his potential just yet, but we think he’s showing a lot of promise.

On top of that, Caroline and Klaus don’t need to rush into anything. They have plenty of time to find their way back to the same city. We just hope it happens before the end of the series.

5. Their chemistry is off the charts

One smoldering gaze from Klaus. One suspicious glance from Caroline. We know that underneath those gazes is a near-irresistible impulse to be in each other’s arms.

Klaus isn’t the only man in Caroline’s life this Valentine’s Day, though. She also has Tyler to deal with now that he’s returned to Mystic Falls from The Originals. The internet is also abuzz with speculation that Stefan (Paul Wesley) may start a relationship with Caroline. Those two have been getting pretty close lately, especially after he came to Caroline’s rescue when Tyler found out about her romp in the woods with Klaus.

Who do you think Caroline should choose this Valentine’s Day?