Anna Kendrick has confirmed that she will star in Pitch Perfect 2 and has already signed on to reprise her role. 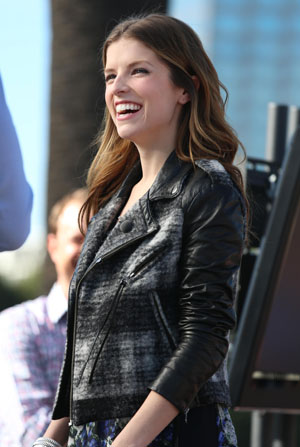 Pitch Perfect 2 is a reality and Anna Kendrick will return to the sequel. The actress confirmed that she has indeed signed on for the movie even though there isn’t even a script yet.

Kendrick will reprise her role as Beca in the sequel to the 2012 hit Pitch Perfect, she told Us Weekly, and she doesn’t even know what it will be about.

“I’m very excited!” she told Us at the Daisy Marc Jacobs Tweet Shop event in New York City on Thursday. “I mean, I’ve signed on with no script, so you know, if it becomes about parasailing instead of singing, don’t blame me!”

The original musical comedy centered on Beca and her college a cappella group, the Barden Bellas, as they got ready to win a national competition. No word on what the plot will be, but the sequel has been in the works since April of last year. “That’s kind of a weight off everybody’s shoulders that it’s done and happening,” Kendrick added.

While the “Cups” singer said she’s not sure what music will be featured in the film, she believes the musical theme will be different.

“I mean, I’m sort of speculating, like I don’t really know,” Kendrick continued. “I’ve heard, like, whispers of rumors. But I think tomorrow we’re going to get into the actual music.”

Not only has Kendrick confirmed she’s on board for the film, but The Hollywood Reporter also confirmed that Rebel Wilson will reprise her role as Fat Amy after she tweeted, “@AnnaKendrick47 & Myself: 2 Girls, 1 CUPS in Pitch Perfect 2 x.”

Additionally, Skylar Astin also told Us that he’ll be back as Beca’s love interest and fellow singer, Jesse. “I’m pumped, I love the cast. I’m very close with the entire cast — we’re all excited to get back,” Astin said, revealing that shooting is set to begin in May.