Shia LaBeouf just signed on to a new film with Bill Murray, and Murray is already teasing the actor about some very serious matters. 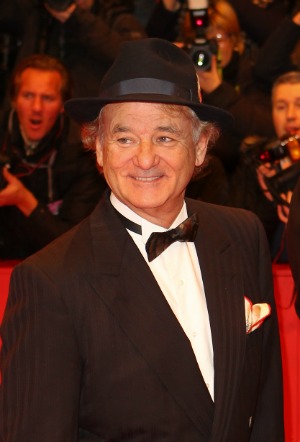 Bill Murray isn’t known as the most serious person, but if he says something, everyone listens. Shia LaBeouf has been in some trouble recently, and Murray decided to offer an explanation for his fellow actor’s problems.

“Shia LaBeouf, I don’t know. He’s got a funny name,” Murray said at a press event at the Berlin Film Festival, where he was introduced as the “Murray-cane,” according to The Hollywood Reporter. “That’s his problem… and cross to bear. It’s like A Boy Named Sue. He probably got beat up a lot.”

LaBeouf was seen as something of a golden child until just a few months ago, when he was accused of plagiarizing his film HowardCantour.com. The story was reportedly taken from a comic book by Daniel Clowes. LaBeouf admitted to being a fan of the writer and using it as “inspiration.”

But then, it looks like he may have actually plagiarized that apology as well.

Murray and LaBeouf are working together on Rock the Kasbah, a “music-filled comedy” according to THR. Murray was also at the film fest for the premiere of two of his films, The Grand Budapest Hotel and The Monuments Men.

Rock the Kasbah also stars Bruce Willis, Zooey Deschanel and Danny McBride. LaBeouf has only been a part of the project for a week, but Murray obviously feels he can already joke with the actor.

Murray’s numerous films have him out on press duties, but he is up for the task of promoting all his projects. He explained his trip in just a few sentences, saying, “I have to leave now and go to a hotel and answer questions about what it was like working with Wes Anderson. Tomorrow, I have to go to another hotel to answer questions about working with George Clooney. Answer those questions 700 times and see how you handle it, and see if you’re not drinking at the end of the day.”

Rock the Kasbah is expected to begin filming in June.