The cast of The Walking Dead made an appearance on Conan O’Brien’s talk show and revealed who they wanted to see hook up, which of them carries swords in their car, whether or not they thought the show would get a happy ending and much more. 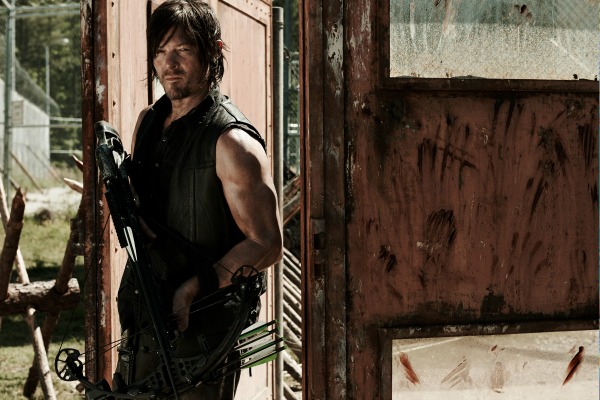 There are just two more days until The Walking Dead Season 4 returns and you could cut the anticipation in the air with a katana. Last week we shared 5 ways to stay busy until the show returns and now you can add watching the cast on Conan to that list.

The cast, including Steven Yeun, Norman Reedus, Lauren Cohan, Melissa McBride and Danai Gurira joined Conan O’Brien for a special episode that began with the host appearing in the opening as a zombie and continued with interviews discussing topics ranging from hookups, happy endings and katanas to favorite horror movies and more.

The Walking Dead Season 4 sneak peek videos: Who will survive? >>

A Glenn and Daryl hookup?

Apparently, some of the cast have been joking about the possibility of a new couple finding their way to romance on the show: Daryl and Glenn. When Conan asked the cast about it, Cohan said, “Everybody thinks it’s possible.”

Yeun even had it worked out in his head exactly how the whole thing would go down. “That’s a season B-story line that could spin off,” he said. “A beginning B-story, then it turns into the primary A-story. You see them go off on a run and then one of them falls and the other person falls on top of the other person. And then they accidentally touch lips and then they’re confused and it writes itself from there.”

When Reedus was told about the possibility, he reached back to hold Yeun’s hand, which made everyone laugh.

How to survive an apocalypse, according to Danai Gurira

When the question of surviving a real apocalypse came up, many of the cast said they knew they wouldn’t survive long. Everyone except Gurira, who said that survival had to start from within.

“I think the change has to be a mental one. You have to adjust how you think,” Gurira said. “If you’re still thinking in the realm that you’re in right now, you’re going to be gone quickly. What you have to do is you have to completely alter how you see the world and how you see yourself surviving, and you have to grab a katana.”

Speaking of that massive sword that Michonne wields on the show, Gurira said she has been caught with them in real life, leading to some awkward conversations.

“I do have a few in my trunk, but it’s not by design. It’s just that when I go to rehearsal or whatever, I have a couple in my trunk. My trunk is like my massive purse, it’s where you put stuff. I have had some guys who have washed the car go, ‘What’s up with this, what are these?’ And I tell them, ‘Don’t play with that.'”

What now? The Walking Dead midseason finale destroys everything >>

Can the survivors expect a happy ending?

O’Brien asked the cast if they ever thought the show could get a happy ending and McBride was the first to speak up with her opinion. Sadly, she doesn’t think the group could survive the mental anguish that they’ve all been through without coming out permanently scarred.

Norman Reedus enjoyed scaring his teacher as a kid

The subject of horror movies came up a few times and Reedus revealed how one film influenced him when he was a child. “My favorite move was The Omen,” he said. “I used to have a second or third grade teacher that I would stare at like I was Damien.”

Why was he interested in scaring his teacher? “I was enthralled with the fact that I could make somebody older than me squirm.”

Does a major star from The Walking Dead have a role in The Crow? >>

Check out a clip from Conan O’Brien’s chat with the cast of The Walking Dead.