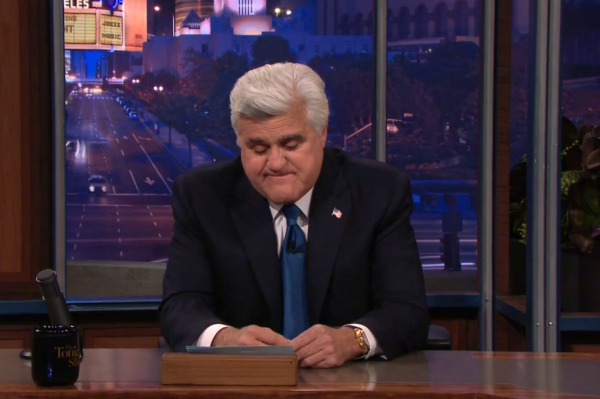 A host of celebrities came out to say goodbye to Jay Leno on his final night behind the desk at The Tonight Show, and it was a moving and emotional tribute to a long career.

Led by Leno’s longtime pal and first guest ever Billy Crystal, tons of stars dropped in to give him their good wishes despite the numerous zings he’s thrown in all their directions over the years.

Oprah Winfrey, Billy Crystal, Kim Kardashian, Garth Brooks, Sheryl Crow, Carol Burnett and Jack Black joined together to serenade Leno with a satirical version of “So Long, Farewell” and even President Barack Obama got in on the act, sending Leno a special videotaped message.

“Jay, you’ve made a whole lot of jokes about me over the years, but do not worry, I’m not upset,” the president said. “On a totally unrelated note, I’ve decided to make you my new ambassador to Antarctica. Hope you’ve got a warm coat, funny man.”

“Boy, this is the hard part,” Leno said to his fans at the end of the show. “I want to thank you — the audience. You folks have been just incredibly loyal and… this is tricky… We wouldn’t be on the air without you people. Secondly, this has been the greatest 22 years of my life.”

“I am the luckiest guy in the world,” he added. “I got to meet presidents and astronauts and movie stars. It’s just been incredible.”

“I’m really excited for Jimmy Fallon,” he said. “It’s fun to be the old guy and see where the next generation takes this great institution. I’m so glad I got to be a part of it, but it really is time to go and hand it to the next guy. And in conclusion, I want to quote Johnny Carson: ‘I bid you all a heartfelt goodnight.'”

The end was made even more bittersweet for Leno because he didn’t actually want to leave — NBC forced him out, and unlike the Conan O’Brien fiasco, this time it looks like it will stick.

“I don’t need to get fired three times, I get the hint,” he said in his opening monologue.

He explained in an interview with 60 Minutes in January, “It’s not my decision [to leave]. And I think I probably would have stayed if we didn’t have… an extremely qualified, young guy ready to jump in. If they said, ‘Look, you’re fired. We don’t know who we’re going to get. We don’t know what we’re going to put in there. But anybody but you, we just want you out of —’ I would be hurt and offended. But this makes perfect sense to me. I understand this.”