Is there anyone who doesn’t love the Beatles? Probably — but we’re ignoring them. Just because you love the fab four doesn’t mean you haven’t done spit takes over some of their lyrics, though. 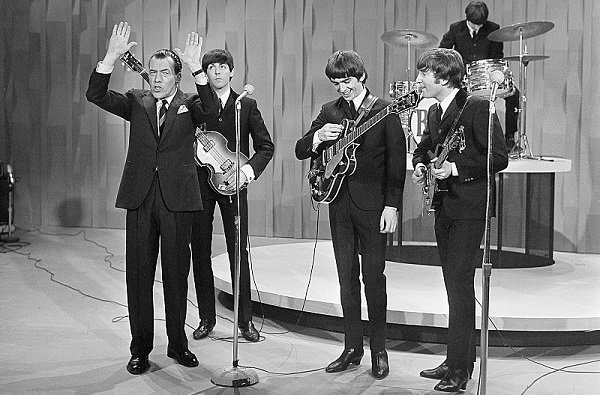 Everyone is celebrating the 50th anniversary of when the Beatles came to America and performed on The Ed Sullivan Show. Just because the members of the SheKnows gang are almost all a little too young to remember that moment doesn’t mean we don’t love the fab four. As the band became more disjointed and fame seemed to lead them into some pretty heavy drug use, the Beatles’ lyrics went from mostly pop-y and fun to mostly just… weird. Sometimes there is meaning in that weirdness, and sometimes there isn’t. Here’s a look at some of their finest, strangest moments!

Paul McCartney is still alive and has new music >>

“I Am the Walrus”

I am the eggman
They are the eggmen
I am the walrus
Goo goo g’ joob.

Some people think “I Am the Walrus” is utter nonsense. Many, though, believe it’s about the cycle of human life. “The eggman” is supposed to represent a sperm, the very beginning of human life. A walrus is an image of how an old man would look at the end of his life cycle.

Then there’s this Welsh Rarebit wearing some brown underpants
About the shortage of grain in Hertfordshire
Everyone of them knew that as time went by
They’d get a little bit older and a litter slower but
It’s all the same thing, in this case manufactured by someone who’s always…

The chorus of “Revolution 9” is just “number nine” repeated over and over again. This is one of those “if you play it backward” deals where people swore they heard all kinds of things. Some even believed it was satanic. Later, Lennon explained to Rolling Stone that it was made by looping test tracks.

He said, “‘Revolution 9’ was an unconscious picture of what I actually think will happen when it happens; just like a drawing of a revolution. All the thing was made with loops.”‘

Oh now
I roll a stoney
Well you can imitate everyone you know.

Lennon said on multiple occasions that “Dig a Pony” was nonsense — but there are people who can find meaning in anything. In this instance, many people believe Lennon was referencing the epic Beatles vs. Rolling Stones debate. The “stoney” is supposedly Mick Jagger. Burn!

The Beatles make the list of best mashups on the web >>

Why don’t we do it in the road?
No one will be watching us.

Another classic, seemingly meaningless number from The White Album, this song only has two lines. We’ll let you decide on the meaning, but the backstory is simple enough. In Paul McCartney: Many Years from Now by Barry Miles, McCartney is quoted as explaining that the song was inspired by seeing two monkeys going at it in India.

Strawberry Fields was the name of a children’s home near where Lennon grew up. He and his friends used to play in the untamed bushes behind the home. The song is pretty much about escapism, particularly about escaping from the unsettling times during which the song was written and back to a carefree childhood.

These lyrics aren’t that confusing, but we love the song and think it’s worth a mention. People who don’t know much about marine life may think “an octopus’s garden” is completely nonsensical, but it’s not. Octopi usually swim along the bottom of the sea, collecting rocks and shiny shells with which to build their gardens. When Ringo Starr learned that fact, he went about writing the song.

I once had a girl, or should I say, she once had me…
She showed me her room, isn’t it good, Norwegian wood?

There are plenty of people who might know this, but our younger readers may not. You know all those decorating shows where the walls of the rooms are covered in wood paneling? That’s Norwegian wood. At the end of the song, the singer sets the Norwegian wood on fire — basically burning down the house. Why? Because that girl had him sleep in the tub instead of in her bed!

Most people think this song is about absolutely nothing. However, there’s a large contingent of Internet users who believe each verse relates to a different Beatle. According to one SongMeanings.com user, elBajista, the above verse refers to Ringo. In particular, “He come groovin’ up slowly” is related to Starr’s “old-school” beats when he first started playing.

So we sailed up to the sun
Till we found the sea of green
And we lived beneath the waves
In our yellow submarine.

Don’t think too hard about this one, kids. Upon its release, many tried to find ties to escapism or political beliefs, but it’s all conjecture. According to Paul, the song was always meant to be dreamy and nonsensical.

According to BeatlesInterviews.org, in 1966, McCartney defended the song by saying, “It’s a happy place, that’s all. You know, it was just… We were trying to write a children’s song.”

Oh, John. Lennon explained this little jam during his last recorded interview (transcribed in David Sheff’s book All We Are Saying). According to Lennon, the song was based around an incident involving a friend of a friend. He had a girlfriend/wife, but this one dressed in polythene. She was too good to pass up.

“Perverted sex in a polythene bag. Just looking for something to write about,” said Lennon.

Want more music and TV news? Sign up for our newsletter! >>

Obviously, these aren’t the only ridiculous lyrics from the Beatles. These are just some of our favorites. Tell us what Beatles song has made you absolutely crazy trying to understand it!