Is a Big Bang Theory wedding just around the corner? Probably not. But, Kaley Cuoco told Hollywood Reporter she has her fingers crossed that it will happen soon. 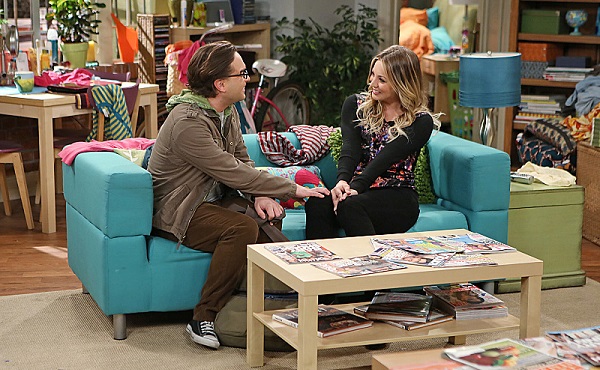 Enough is enough! Many fans are getting tired of watching The Big Bang Theory‘s Penny and Leonard continually bounce off each other. After three failed proposals, we’re ready to see the two navigate the next steps in a relationship. Even the show’s leading lady, Kaley Cuoco, agrees.

Big Bang Theory gets musical and makes us swoon >>

“Maybe because I just got married — so come on Penny and Leonard,” Cuoco told Hollywood Reporter. “It’s been six years! It took us six months! But I hope that’s in the cards for them.”

We agree. While marrying after six months may not be in the cards for everyone, this six year wait is beginning to become excruciating. Between the two of them, there have been three failed proposals: two from Leonard (Johnny Galecki) and one from Penny. Penny’s proposal seemed more out of desperation than anything else. And Leonard. Oh, geez! Penny has rejected the needy nerd twice. It’s getting almost as hard to watch as Amy Farrah Fowler’s cringe-worthy need for physical interaction with Sheldon.

Ugh! Of course we know she’s right. We still love The Big Bang Theory, but they’ve definitely fallen into some patterns:

Of course, it works. So, why stop? Possibly because some of these tropes are beginning to feel like they’re beating a dead horse. Would it kill them to put Amy in a nice dress once? Mayim Bialik is gorgeous. Or let Raj find happiness for a while? Or, like we mentioned above, let Penny and Leonard take the next step.

Leonard and Penny’s marriage doesn’t have to be the shark jump. There’s still so much comedic potential around them, as well as all the new stuff that comes with moving in together or marriage, and knowing they’ll always have Sheldon as a third wheel/older child/pet nerd.

While we doubt the The Big Bang Theory showrunners are on our side, we’re glad we’ve got the newly-married Cuoco to back us up on the desperate need for something more in Penny and Leonard’s relationship. Maybe by season’s end…