Is Demi Lovato engaged or not? A couple of seemingly innocent tweets have gotten fans talking about the status of her relationship with Wilmer Valderrama — but now she’s setting the record straight. 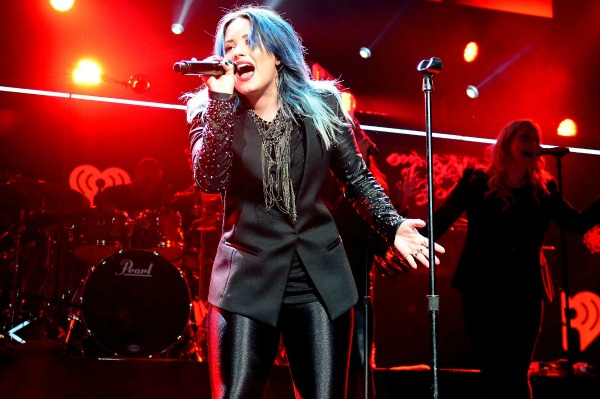 Demi Lovato got people talking with a tweet about the happiest day of her life paired with a snapshot showing a ring on that finger. So is she or isn’t she engaged to her longtime boyfriend, That ’70s Show star Wilmer Valderrama?

The tweets that set the rumor mill in motion:

We’re sorry to break it to you, Lovatics, but that rumor is false. The “Skyscraper” singer set the record straight in an interview with Extra.

“I’ve heard the rumors, even people who were really close to me called me and were like, ‘Are you engaged?'” she told Mario Lopez. “No, I tweet one thing… I think the tweet was ‘I never felt more incredible in this moment than I have in my entire life.’ Honestly, it was just because I was healthy and happy and at peace in my mind, and I was looking at the future and I was like, wow, I have so much going for me and people were like: she’s engaged.

“I was like, honey, if I was engaged, I would be showing the rock off — I’m not gonna be one of those girls that hides it.”

Bummer. One less moment to write about in her planned tell-all. Not that she would have the time to plan a wedding anyway. Lovato is kicking off her Neon Lights Tour with Nick Jonas on Feb. 9 in Vancouver, and she and her team have a laser-sharp focus on the show.

“Everyone on the team is required to stay clean and focused. It’s not about trying to party, it’s about putting on the best show, and everyone needs to be in tip-top shape to do so,” she explained. “I’ve never had a show like this in my life and I’ve never been so fired up for a tour.”

Demi Lovato was suicidal at 7 years old
Is Miley Cyrus replacing Demi Lovato on The X Factor?
Demi Lovato opens up about the death of her father