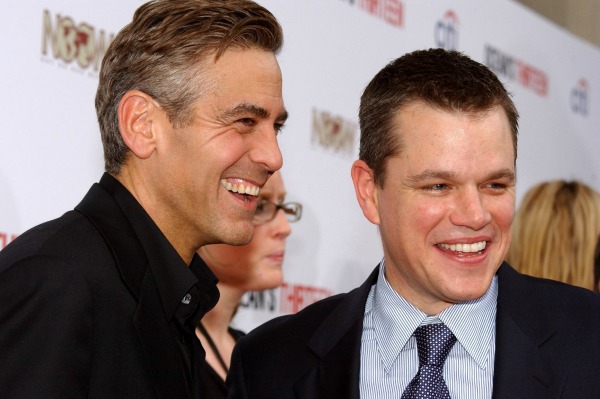 George Clooney nailed not just one but three of his celebrity pals in one shot with his latest prank.

During his appearance on The Late Show With David Letterman, Matt Damon explained how some lovely gifts turned out to be the result of a little joke Clooney played not just on him, but on Tina Fey and Amy Poehler as well.

“I was sitting in my house last week… Did you see the Golden Globes this year? [Tina and Amy] made fun of all of us, and it was great. They called me a garbage man at one point. But it was funny,” Damon explained.

“So I’m sitting at home and I get two fruit baskets, and they’re the size of your desk — I’m not kidding! They’re the biggest things I’ve ever seen. And one says Letter No. 1 with an envelope attached, and the other says here’s Letter No. 2 with an envelope attached. I open the first envelope and it’s this apology from Tina and Amy saying, ‘We really thought you could take a joke. We’re sorry we hurt your feelings.'”

The Monuments Men actor then whipped out the second letter, which he read for the audience.

“‘Dear Matt, if your note is part of some George Clooney prank, as I very strongly suspect it is, you A-list amateurs are gonna have to step it the f*** up. We are not some easily confused starlets you’re dealing with here. We are grown-a** professional comedians. Please accept this fruit as a token of our sincerity. Best wishes, Elizabeth ‘Tina’ Fey and Amy ‘Boston’ Poehler,'” he read.

Damon’s theory is that Clooney “got ahold of made-up stationery with my name on it and sent them some wounded letter from me. So I have no idea how many letters are out there!”

See another of George Clooney’s pranks on Matt Damon >>

So does Damon have any plans for payback? “I have four kids! I don’t have time to,” he said. “He’s got nothing but time!”