Forget trying to bring Elena back to life — The Vampire Diaries has bigger problems in the form of Damon. There’s a chance he’s too far gone after this one. 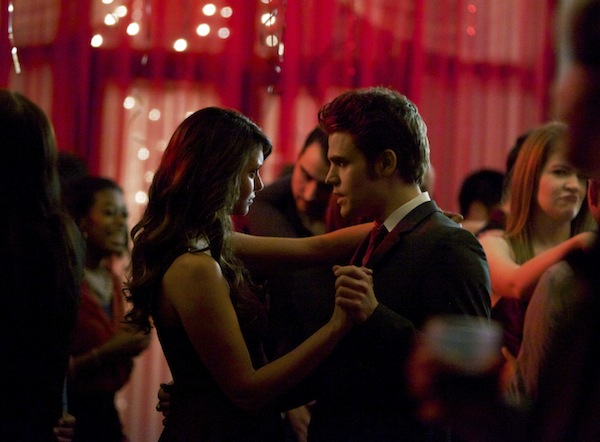 The Vampire Diaries isn’t shy about going to extremes. Just when we thought Damon (Ian Somerhalder) was changed for the better, Katherine as Elena (Nina Dobrev) managed to flip his switch back to the dark side. While this never would have happened if Elena were still Elena, it has, thanks to Katherine, and there’s no clear remedy in the future.

After we reconcile that it’s going to be a while until the gang discovers Elena is Katherine (she’s gotten really good at being Elena), we can focus on the more immediate problem: Damon has either turned off his emotions or he’s gone insane. All odds are pointing to the plea of insanity though Damon prefers to blame his woes on karma.

The road back is going to be maybe the roughest we’ve seen yet. We can’t wait to see how Damon reacts when he discovers Elena is actually Katherine. You know it’s coming! We just don’t know when or if it’s too late now for Damon. It can’t be too late. Right?

This episode starts with another theme party. I was in a sorority, and even I don’t think I went to as many dances as they do on The Vampire Diaries. What is up with all the balls? There’s been one every episode lately.

This time around, it’s The Bitter Ball, where we can shred our wounded hearts in hope for a better future for those of us who are single on Valentine’s Day. Caroline (Candice Accola) has lots of shredding to do. Tyler skips the ball and goes straight for the shots.

Meanwhile, Katherine loves being Elena but hates playing along with the goody two-shoes role. That doesn’t stop her from saving Jeremy after Damon and Enzo threaten his life to get their hands on Dr. Wes. Don’t think she’s going soft. Nadia insists Katherine save the “little brat” to keep up appearances.

Damon drowns his sorrows in blood and bourbon

Mostly, this episode focuses on Damon and Enzo and their trip down the blood-stained road. The only heart and brain they want to find at the end are the ones they can eat. It’s vaguely reminiscent of Stefan (Paul Wesley) and Klaus, we have to admit.

Do we want Enzo dead or don’t we? We’re torn. Aside from the fact he’s so much fun to look at, he really wasn’t a bad guy before Damon came along and abandoned him in a burning building. Now, he’s just trying to make amends. Can we blame the guy? Well, yeah, OK, all the killing isn’t really that awesome. We liked Aaron! But we think there’s still hope he could pull a Klaus (Joseph Morgan) and find a place in our hearts.

This time around, it’s Stefan and Elena to the rescue. Or, at least we thought it was, until Dr. Wes had the smarts to ally with the Travelers.

When Damon and Enzo finally track Dr. Wes down, things don’t end well. Remember that serum that makes vampires crave vampire blood? It’s the stuff that led to Jesse’s demise. Yeah, well, it’s back and Damon manages to get himself doped up on the stuff. There isn’t exactly a cure. As Enzo so cleverly points out while Damon is vigorously devouring another vampire, this could definitely be a problem.

Meanwhile, Nadia is playing on the whole “my mom died bit” to get back into Matt’s pants. The problem is, of course, that she’s a conniving fraud just like her mom. Matt catches on, thanks to Tyler, which only causes Nadia to get paranoid and threaten to begin a murder rampage worse than Damon and Enzo’s.

We’re left asking ourselves: Can Stefan and Katherine as Elena save Damon? Not exactly the power couple there. The odds are looking slim. But come on, we know someone will save Damon. And Caroline is already getting suspicious of Katherine. It’s only a matter of time. The interesting part is going to be watching how it all unfolds.