The 2014 Winter Olympics coverage begins today and the frigid air (in much of the country) is filled with anticipation. Why do we love the Winter Olympics so much? The answer is revealed in Blades of Glory. 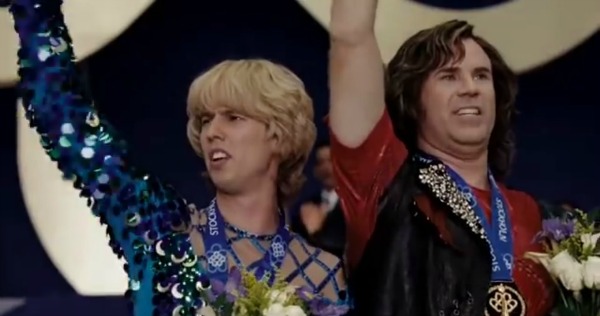 We love nothing more than an Olympic rivalry, and Will Ferrell (Chazz Michael Michaels) capitalized on this truth by exaggerating it with his arch nemesis Jon Heder (Jimmy MacElroy) in Blades of Glory.

How much do we love the commentary that is delivered in strained whispers during the Olympics? Is there anything better than watching superhuman athletes execute a move that makes us hurt physically just by watching it only to have the commentator exclaim, “Oh! Too bad. The landing of that triple Salchow was three-eighths of a centimeter off. Trust me, Bob, the judges noticed.”

Every triumphant tale needs a villain, and Amy Poehler delivers in BOG with classic lines like, “You know, I’m not a violent person, but I would love to hold them down and skate over their throats.”

Admit it, the wipeouts get your heart pumping — either because you’re a sympathetic person — or because you’re like the rest of us and for some sick reason it makes you giggle.

Chazz invites Jimmy to “drink it all in” in reference to his “skater’s body.” In the real Winter Olympics, we do admire the physiques of athletes who are willing to put their bodies through grueling workouts for competition. In Blades of Glory, Ferrell’s shirtless form is kind of — what’s the word — revolting. But hilarious.

We always admire in others what we are incapable of. How many of us could take to the ice and skate while holding another man upside down?

… as not demonstrated here.