Lady Gaga has already broken records in the music industry, but next year she will break one of the most exciting of all — she’s going to perform in space! 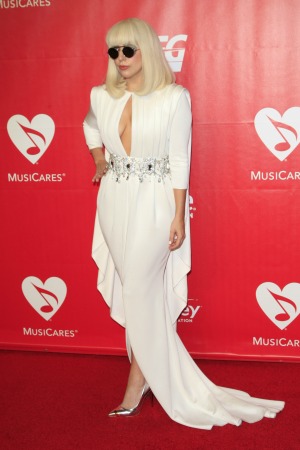 It appears Lady Gaga has already conquered the world, so her next stop is space!

The “Born This Way” songstress was officially asked to perform a song during the eagerly anticipated Virgin Galactic space flight in 2015, which will land Gaga with a new world record — the first artist to ever perform in space.

According to Digital Spy, the “Do What U Want” hit maker previously revealed the news during her ARTPOP album launch, saying, “I did not buy a ticket, no, my ticket was given to me. I was asked specifically to sing.”

“So I’m going to be the first recording artist to sing in space. And I did not purchase my flight.”

And the 27-year-old star is not taking her performance lightly. She was happy to reveal that, “This is a special festival event held by Zero G Colony and I will be flying in space two months after the first commercial flights take off.”

The momentous occasion may only be taking place next year, but Gaga is already extremely excited about her space performance. She recently revealed to Harper’s Bazaar, “I honestly can’t wait. I can’t wait to design the performance. I’m auctioning off my second seat [on a Virgin Galactic flight] to raise money for the Born This Way Foundation.”

“I want to make a moment that is about much more than me. Performing in space is such an honor. I want to challenge myself to come up with something that will not only bring everyone together but will also have a message of love that blasts into the beyond.”

Trust the “Applause” singer to make something positive out of the experience and to try and help others by raising money for her foundation. And we are very glad Gaga is looking forward to her space performance, especially after the news broke that she was suffering from depression as late as last year.

Gaga revealed to Harper’s Bazaar, “I became very depressed at the end of 2013.”

“I was exhausted fighting people off. I couldn’t even feel my own heartbeat. I was angry, cynical and had this deep sadness like an anchor dragging everywhere I go. I just didn’t feel like fighting anymore. I didn’t feel like standing up for myself one more time — to one more person who lied to me.”