Madonna is not afraid to speak her mind and do as she pleases, even if her behavior sometimes results in death threats and arrests. 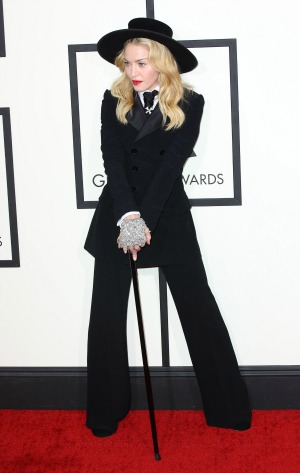 The trio have just been released from prison following an amnesty from the government after serving 18 months of their two-year sentences, and the band still has its fans — one of the most powerful being the queen of pop herself — Madonna.

Taking to the stage of the Amnesty International concert in Brooklyn, New York, on Wednesday, Madonna addressed the star-studded crowd with a passionate speech about human rights and freedom fighting.

The “Give Me All Your Luvin'” hit maker said, “The right to be free, to speak our minds, to have an opinion, to love who we want to love, to be who we are — do we have to fight for that?”

”I’ve always considered myself a freedom fighter since the early ’80s when I realized I had a voice and I could sing more than songs about being a material girl or feeling like a virgin. And I have definitely paid for and have been punished for speaking my mind and for sticking my neck out for this kind of discrimination. But that’s OK.”

Madonna has been a bad girl! She apologizes for racial slur >>

Madge then went on to introduce the members of Pussy Riot, for whom she has much admiration, and she jokingly thanked the brave women for “making p***y a ‘sayable’ word in my household. Now, my 8-year-olds [David and Mercy] say it all the time.”

However, it was not all jokes about the band’s name because the concert had a very serious and important message. According to the New York Daily News, Madonna revealed how she had been threatened with death and arrest during her 2012 Russian tour, all for her alleged “gay behavior.”

The songstress said, ”Needless to say, I did not change one moment of my show. Eighty-seven of my fans were arrested for gay behavior — whatever that is.”