Kim Kardashian and Kanye West have decided to move their wedding up to May instead of July. 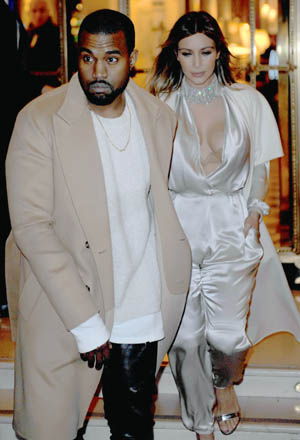 Reality megastar Kim Kardashian and her fiancé Kanye West have decided to get married earlier than planned and pushed their Paris wedding up to May from July.

The famous couple can’t wait to tie the knot and will get married earlier than planned, sources confirmed to Us Weekly. Plus, they revealed their daughter North West, aka Nori, will play a big part in the nuptials.

“North will have a large role in the wedding!” an insider told the magazine, adding that “lots of events leading up to the big day” have been also planned for their guests.

The big wedding will take place in Paris as Kardashian revealed to Jimmy Kimmel on Jan. 23, telling him it was pretty “obvious” by now where the big day would happen. The bride-to-be and her groom visited the French capital some weeks ago and did several tours and had meetings with famed designer Azzedine Alaia.

Apparently, West is more psyched about the wedding plans than Kardashian is and has been doing a lot of the planning himself. “Kim isn’t totally pumped about a huge wedding, but she’s going along with it,” another insider said.

However, Kardashian is very excited about her dress and knows exactly what she wants. She will reportedly do one dress change between the ceremony and reception, and both gowns are sure to be nothing short of fabulous.

Some of the venues the couple visited include the Versailles palace, which they visited at night and posted an Instagram photo of themselves standing in front of the illuminated historical site. Apparently, West is looking for a setting with a historical feel.

With an apartment near the Champs-Élysées, West certainly has lots of options at his disposal.