We love him as the oversexed, Southern hottie Jason Stackhouse in HBO’s True Blood. Now, Ryan Kwanten stars as a hopeless romantic in the new film The Right Kind of Wrong and we have an exclusive clip!

Born and raised in Sydney, Australia, 38-year-old Ryan Kwanten is moving from cable TV’s True Blood to the big screen in the new film The Right Kind of Wrong. He plays Leo Palamino, a writer who spends his days working as a dishwasher after his ex-wife starts a blog exposing his numerous flaws.

The name of Julie’s (Kristen Hagar of TV’s Being Human) blog is “Why you suck” and is the source of Leo’s embarrassment. But this happy-go-lucky dude isn’t looking to retaliate, instead he’s met a woman named Colette (Sara Canning from TV’s The Vampire Diaries), with whom he’s fallen in love at first sight.

There’s just one little obstacle keeping Leo and Colette from being together: Colette’s getting married to the Hummer-driving Danny Hart (Ryan McPartlin from CSI: Miami), a wealthy, ex-Olympic athlete. Can Leo win Colette’s heart before she’s wed to the man of her dreams? Let’s just say it’s going to be tough. 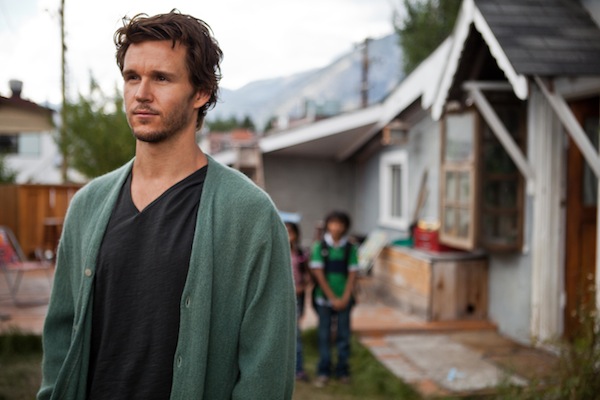 In this exclusive clip, we see Leo attempting to woo Colette with juggling dishes, because what else turns a lady on more? Having received an anonymous note about “A dishwasher with amazing motor skills and themes,” Colette shows up at the diner to investigate.

In addition to juggling metal creamers, Leo waxes poetic about objects in orbit attracting each other, with the help of gravity of course. Her reaction? She runs out of the kitchen. Leo obviously has his work cut out for him if he wants to win her over.

Tim Burton is bringing Beetlejuice back >>

The Right Kind of Wrong is available Feb. 6 on iTunes and On Demand and in theaters March 14.