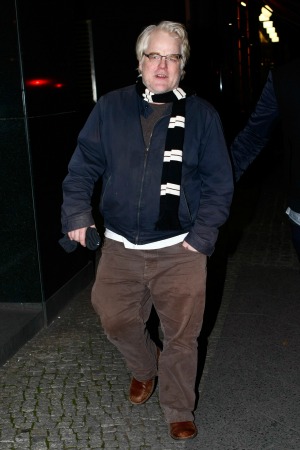 Playwright David Bar Katz has made the bombshell revelation that he and Philip Seymour Hoffman were more than just friends — they were lovers.

In an interview with The National Enquirer, Katz revealed that he and the actor were in “a relationship” — and another source said that both Hoffman’s drug use and his sexual ambiguity drove a wedge between himself and the mother of his children.

“We were homosexual lovers. We had a relationship,” Katz said Wednesday, adding that he had seen Hoffman take heroin on a number of occasions.

“But I never thought his addiction had reached that level,” he said. “We were planning to go to the Super Bowl together and have a really nice day. This is so terrible.”

Katz found Hoffman’s body after the actor’s estranged girlfriend Mimi O’Donnell asked him to check to see why Hoffman hadn’t showed up to visit his children.

“I really thought this chapter was over,” he told The New York Times the day the news broke. “I saw him last week and he was clean and sober.”

Celebs react to the death of Philip Seymour Hoffman >>

A source explained the relationship and Hoffman’s drug use in greater detail. “Philip fell back into heavy drug use soon after he got out of rehab and he never stopped using,” the insider told the tabloid.

“His drug use, and his ambivalence over whether he was straight or gay, drove a wedge between him and Mimi and broke them up. One part of him wanted a normal family life while another part wanted heroin and the gay life. Philip moved to Greenwich Village because it is the center of New York’s gay community. The kids stayed with Mimi, but Philip saw them all the time.”

The actor’s rep denies the relationship and claims the interview with Katz is fake. “The story is completely 100 percent false,” a rep for Hoffman told GossipCop.

UPDATE: Katz and his legal team deny the playwright ever spoke to the Enquirer, deny the story and have filed a $50 million lawsuit against the publication.

“There was no interview,” Katz’s lawyer claimed in the suit. “Bar Katz and Hoffman were never lovers. Bar Katz did not see Hoffman freebasing cocaine the night before he died or at any other time. Bar Katz never saw Hoffman use heroin or cocaine.”