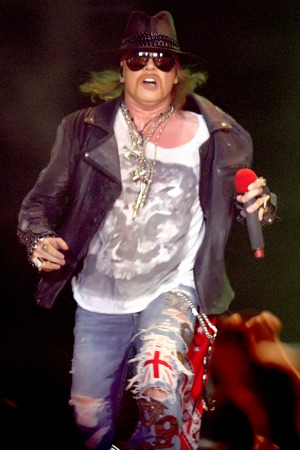 Axl Rose is weighing in on the Super Bowl halftime show controversy, and he has nothing but mocking words for the Red Hot Chili Peppers.

The band, who admitted to miming along to a prerecorded instrument track while Anthony Kiedis sang live, was busted when sharp-eyed viewers noticed that none of their instruments were plugged in.

Flea, the band’s bassist, explained in a blog post on the band’s website that the NFL required them to play along with a backing track and that they purposely left their instruments unplugged to show they weren’t trying to hide anything.

But one fellow rocker is getting a huge kick out of the whole thing. Rose wrote in a mocking op-ed for Billboard, “So consider that maybe sometime before their actual performance that rather than use a guitar cord or standard wireless, that in the name of science and for all mankind Flea courageously had a newly invented breakthrough in microchip technology installed in his a** that picked up the frequencies of his bass and transmitted them to his amplifier.”

“Maybe they all had microchips installed in their a**es and not only pick up the frequencies of their instruments but get Direct TV and the internet too! Like Google Glass… Google A**! They could be ‘Scientific Pioneers!’ Like Buzz Aldrin and s***! True (pardon the pun)A**-tro-nots! Or like Superbowl crash test dummies for bands kinda like those cars that drive themselves!” he continued.

“And besides… If the band wasn’t really playing or wireless or whatever and Anthony was really singing they may have set a new world record for the largest karaoke audience ever! Awesome!”

Sounds like a lot of sour grapes to us… Perhaps Rose is miffed that the 835th incarnation of Guns N’ Roses wasn’t asked to perform?