The Ravenswood winter finale satisfied in many ways by answering questions and reuniting long lost lovers who have never even met. 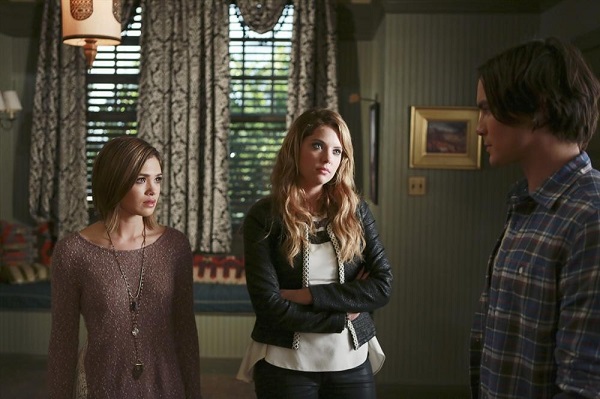 When it was announced that Pretty Little Liars‘ Hanna would be paying a visit to Ravenswood for the finale, it felt like a cheap stunt that might take away from the core story we’ve come to love. I love being wrong. Hanna’s presence was a perfect accompaniment to the love triangle that had unwittingly developed between Caleb and a ghost, and was responsible for breaking up an ABC Family power couple.

Any remaining good will toward Dillon was washed away when the teen with bloody eyes, Ryan Atwater, who led Remy to Collins and Dillon last week led Remy, Luke and Olivia somewhere else — to Mr. Matheson’s office. The twins were treated to their dad’s last minutes on earth.

On one hand, they get to put to rest any fears they had about their parents not loving each other, because the way their dad expressed his love for “Chelle” left no doubt about how he felt about their mom. He was also trying to find a way to stop The Pact, but was interrupted by Dillon who came in to kill him.

Olivia lost some of her most precious possessions in life to Dillon. That’s going to be very difficult to get over.

The finale also firmly established that Collins is not a bad guy, and managed to break our hearts as we realized the enormity of his loss. Being responsible for the souls of the kids who died from The Pact so they weren’t in the hands of Abaddon tormented him. He lost his sister to The Pact and turned away her daughter to try to save her, only to slam the door in her face again when she returned to Ravenswood.

Dillon attempted to get back in the good graces of Abaddon by delivering him all of The Five directly to the chapel by kidnapping Remy. Spider woman was Abaddon in disguise and a few twirls and there was the preacher man. Abaddon played everyone by turning on Dillon and promising to take his life in exchange for Miranda’s. It was easy to fall for it, and I would have if I were The Five.

Collins was onto things by now, and came rushing in, a soul jar in hand. No longer afraid of Abaddon, he said he now knew what he believed all along, that the two together were stronger than Abaddon and that’s what Abaddon feared. Collins smashed the jar and Miranda’s brief stay in the corporeal world ended. Abaddon needed The Five alive to kill them all at once to satisfy The Pact.

ABC gets into the zombie game with Resurrection >>

That’s when it became apparent why Hanna needed to be in Ravenswood. Miranda had to see the love between Caleb and Hanna and separate her spirit from his person. They can never be, and she realized that. She was hurt, but original Caleb found her on a bench and it seemed like Miranda had original Miranda’s memories. The souls of Miranda and Caleb are the key to fighting The Pact and Abaddon.

That was quite a twist. Realistically, Tyler Blackburn could return to Pretty Little Liars and reunite with Hanna and still stick around Ravenswood as original Caleb, the ghost boyfriend of Miranda. That would break The Five and The Pact, but it would make Caleb fans happy. Or Caleb could date Olivia now that she’s short a boyfriend. There are so many possibilities!

What did you think of the Ravenswood winter finale?