The team tracks Quinn to a train, but things quickly go awry and soon the entire team is split up and facing danger from all sides, but one team member in particular may not make it back at all in “T.R.A.C.K.S.” 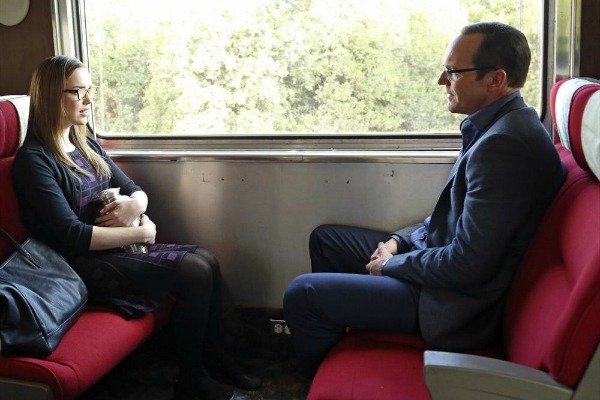 In my review of the last episode, I remarked that it looked like the show was finally starting to live up to the hype. I was a tad worried that maybe the past couple of episodes were flukes, but I have never been happier to be completely wrong. Each episode seems to top the last one and this episode was no different.

We’re at the point in the show now where the characters are very familiar and yet it’s fun to see new surprises from them all the time. It was great to see more unusual pairings in this one, with Simmons and Coulson teamed up as a father and daughter, Ward and May as a traveling couple (you wouldn’t think that would be a stretch for two people sleeping together, but Ward and May definitely aren’t a typical couple) and then Skye and Fitz as a couple of Americans.

It wasn’t just the pairings that brought the surprises in this episode — there was so much more than that. First of all, there was the use of time and how the episode went back to the same moment and doled out a little more information each time. Making the audience (and Ward and Coulson) think that the train had disappeared was a very nice touch. Giving only small hints at a time made the payoffs that much better, such as discovering exactly why May chose to stab Russo in the back.

Though it had nothing to do with the time variances, Skye discovering Mike in his hyperbaric chamber was quite the shock for her. We knew he was alive of course, but now we also know more about what his mission is and his new identity. As many had predicted, Mike has indeed become Deathlok, but since I don’t know a lot about the comics, that’s about all I know. I’m choosing not to study up on the comics as I want to stay in the dark and watch the stories unfold on the show.

Another shock was Skye taking two bullets to the gut. That girl has certainly had it rough this season, but this was by far the worst she’d ever been through. While I have no doubt that she’ll survive (then again, this is a Joss Whedon show so anything is possible), I am curious to see what the repercussions of this mission will be.

One repercussion may have already made itself evident. Ward’s anger was completely understandable, but I, like May, thought that he was blaming himself. When he said he wasn’t blaming himself, I could only think of one other person he would blame: Coulson. That could spell a lot of difficulties to come, especially if Ward decides to start questioning Coulson’s decisions.

Shirtless Ward. That is all.

May calmly telling Ward she told Coulson about them, before climbing out the window.

“You’re the least supportive pretend girlfriend I’ve ever had.”

Stan Lee making a cameo appearance on the train.

Laughing oh so very hard at Ward trying to get the holotable to work. And then laughing even harder when Coulson joined in. So adorkable.

“If it is just sex, Ward, you should get more comfortable using the word.”

May using the knife Russo so graciously “gave” her.

“Look at her little face. She’ll be so embarrassed.”

The look on Fitz’s face when the body fell on the car he was under.

Skye taking a breath in the chamber.