Ezra may have eyes everywhere in town, but Spencer is getting too close for comfort. She’s getting so close that Ezra is leaving Aria alone in bed just after he got her back. What’s next? 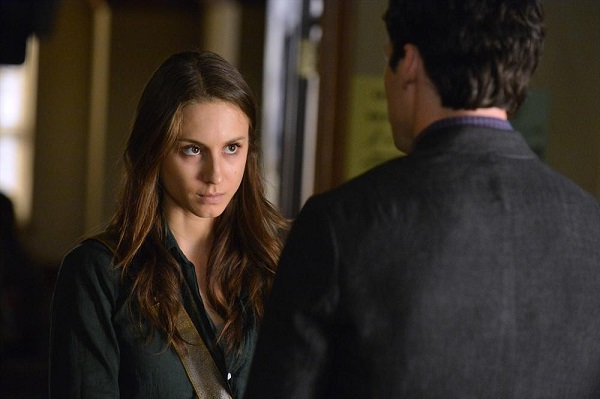 Spencer’s obsession with Ezra seems natural to us, because we’ve seen Ezra in action. But to her friends, she’s one feather shy of a trip to the cuckoo’s nest. If she keeps taking drugs at the alarming rate she’s been downing them, she’s going to go whether she likes it or not.

ABC fires Dancing With the Stars orchestra after 17 seasons >>

Does Radley have a drug rehab division? Something tells me Mr. Hastings is going to wish he had closed that place down when he had the chance. Not only is Spencer doing it to herself by propelling herself forward at the cost of her schoolwork and social life, but it appears dear Mr. Fitz is going to get into the game courtesy of prescription pads from one Dr. Wren Kim. Who knows what she’ll down thinking they’re her speed.

Ezra also seems to be all places at all times, and with the twin poster utilized as a hiding place for Ali’s cash, I’m wondering if twins might show up in Rosewood after all. Unless the editing was completely off, one second Ezra was watching Spencer and Hanna at his apartment and the next he was standing behind Aria at the cabin.

While this has been done before, it usually occurs with a commercial break in between or a different scene break. Something about the immediacy of it and the notion of twins made me think maybe the person with the crazy twin on Pretty Little Liars will be Ezra.

The writers have mentioned they weren’t using the Alison/Courtney plot from the books, but they’ve also not ruled out Ezra not being the bad guy we’re all assuming. What if he’s a twin and has been somehow protecting Aria from his brother? Maybe his twin was in Radley.

Ezra kept talking about the truth and there isn’t anything that comes to mind that Aria knows that he would like to know. She’s been fairly out of the loop with the girls as she hides her life with Ezra from them. Does he have a truth he wants to share?

ABC gets into the zombie game with Resurrection >>

The other evidence I have is how different evil Ezra dresses from regular Ezra. Why would he don a windbreaker and baseball cap? That’s not much of a disguise. What the hooded A was watching at the end of the hour on television, with the man who had a face covered in bandages, also made me think something is up with Ezra and his family.

Meanwhile, Ali’s out there with nobody to help her because A knocked out Shana and sent her running. Who knew she would be so easily frightened? It’s time for Ali to look beyond Spencer’s mistake in the warehouse and reach out to Emily. Her friends are her only hope. They’re better together than apart.