Were the Red Hot Chili Peppers lip-synching at the Super Bowl? Flea explains how it all went down. 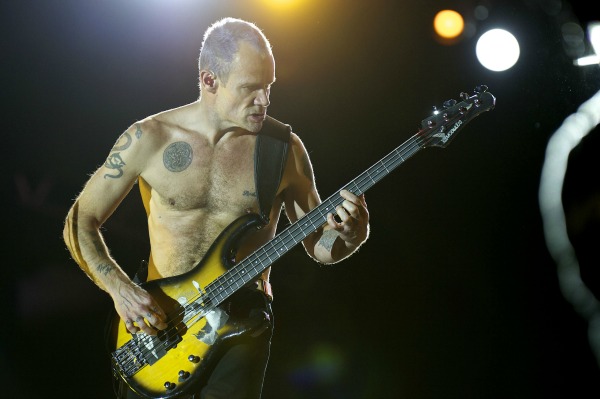 The Red Hot Chili Peppers appeared to giving a rockin’ live performance with Bruno Mars during the Super Bowl halftime show — until sharp-eyed viewers noticed that none of their instruments were even plugged in.

Now Flea, the band’s bassist, has admitted that the only thing “live” about their performance was singer Anthony Kiedis’ vocals — but they struggled with whether or not to do it at all.

“When we were asked by the NFL and Bruno to play our song “Give It Away” at the Super Bowl, it was made clear to us that the vocals would be live, but the bass, drums and guitar would be pre-recorded,” he explained in a post on the band’s blog. “I understand the NFL’s stance on this, given they only have a few minutes to set up the stage, there are a zillion things that could go wrong and ruin the sound for the folks watching in the stadium and the TV viewers. There was not any room for argument on this, the NFL does not want to risk their show being botched by bad sound, period.”

“…So, when this Super Bowl gig concept came up, there was a lot of confusion amongst us as whether or not we should do it, but we eventually decided, it was a surreal-like, once-in-a-life time crazy thing to do and we would just have fun and do it. We had given this a lot of thought before agreeing to do it, and besides many a long conversation amongst ourselves, I spoke with many musician friends for whom I have the utmost respect, and they all said they would do it if asked, that it was a wild, trippy thing to do, what the hell,” he continued.

“We decided that, with Anthony singing live, that we could still bring the spirit and freedom of what we do into the performance, and of course we played every note in the recording specially for the gig.”

Flea also revealed that the decision to leave their instruments unplugged was a calculated move, not a thoughtless error or something they thought no one would notice.

“For the actual performance, Josh, Chad and I were playing along with the pre-recorded track so there was no need to plug in our guitars, so we did not. Could we have plugged them in and avoided bumming people out who have expressed disappointment that the instrumental track was pre-recorded? Of course, easily we could have and this would be a non-issue. We thought it better to not pretend. It seemed like the realest thing to do in the circumstance.”

Interestingly, while there has been a little chatter online in the last two days about whether or not the band was playing live, it has been nowhere near the deafening roar of indignation that arose when Beyoncé was rumored to be lip-synching the national anthem at Barack Obama’s inauguration.