A British TV presenter is under fire for slagging off Lily Allen about her weight. 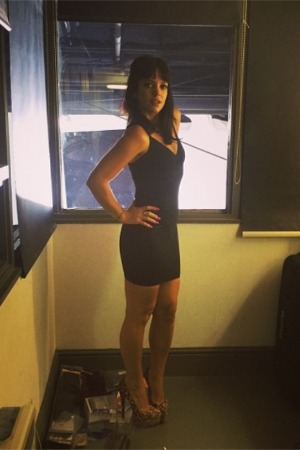 A British TV personality is learning the hard way that Lily Allen takes no crap.

Katie Hopkins recently slammed the singer in a TV interview, saying she has no real talent and looks hideous after gaining weight during her pregnancies.

“I’m not one for Lily Allen really,” Hopkins said. “I quite liked her when she was singing and kind of interesting and then she went off to tell us all about being a mother. She was removing herself from the spotlight because she wanted to be a mother and that largely I think involved gaining two stone [about 28 pounds] and looking pretty hideous.

“So then she decided that was boring and now she wasn’t going to be a mother any more, she was going to be a singer again. Like Peaches [Geldof], she is just famous for having a famous dad.”

Allen, whose first child was stillborn at 6 months after suffering from a viral infection, took huge offense to Hopkins’ comments and fired back in her usual outspoken way.

“Katie Hopkins: I am not famous for having a famous dad, I doubt that most of my fan base have a clue who my father is,” she wrote in Twitter posts that have since been deleted. (For the record, her father is a British actor/musician.)

“Yes, after tragically losing a child so late into my pregnancy I may have gained a few pounds. I am one of many that find comfort in food. The two pregnancies that followed were terrifying because of what had happened before and I was pretty much on bed rest for 20 months,” Allen continued. “I wasn’t exercising because I didn’t want to take any risks, and funnily enough, survival of my children felt more important than being thin.”

And in one final dig, Allen added, “Can somebody tell me what Katie Hopkins does except go on telly slagging off girls half her age? Ps Katie looks are obviously important to you. There’s always plastic surgery ya know. Maybe they could sew your mouth up while they fix the rest of you.”

But the singer wasn’t done. She posted the above pic on her Instagram, looking super-hot in a skintight black dress with the caption, “Just going to the shop, want anything Katie?”

Tell us: Should Allen have even responded to Hopkins’ ugly comments?