The producers of the Oscars announced their first big name for the March 2 ceremony. Pharrell Williams will be hitting the stage. 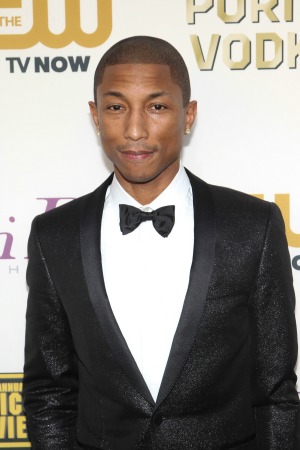 With only 26 days remaining until the 86th Annual Academy Awards begin, show producers Craig Zadan and Neil Meron are getting excited about the lineup. On Tuesday, the Academy of Motion Picture Arts and Sciences announced that Oscar nominee Pharrell Williams will be performing at the ceremony.

The musician’s song “Happy” from the animated movie Despicable Me 2 was written and produced by him. It was nominated for Music (Original Song) alongside three other tunes, including “Ordinary Love” from Mandela: Long Walk to Freedom, “Let It Go” from Frozen and “The Moon Song” from Her.

Williams’ song made a big splash when he created a 24-hour music video for it. He sings the tune at the top of each hour for a total of 24 segments and then lets other people from all walks of life finish out the hour.

The Music (Original Song) category has not been without controversy this Oscar season since one nominee, “Alone Yet Not Alone,” from the movie of the same title, was disqualified for campaigning during the nominations round. Bruce Broughton was not only a nominee for the film, but a member of the Academy with insider access to members’ email addresses to campaign.

The Academy sent out a press release after they rescinded the film’s nomination.

They wrote, “As a former Academy Governor and current member of the Music Branch’s executive committee, Mr. Broughton should have been more cautious about acting in a way that made it appear as if he were taking advantage of his position to exert undue influence. At a minimum, his actions called into question whether the process was ‘fair and equitable,’ as the Academy’s rules require. The Academy is dedicated to doing everything it can to ensure a level playing field for all potential Oscar® contenders—including those who don’t enjoy the access, knowledge, and influence of a long-standing Academy insider.”

With that controversy behind them, the producers are looking forward to announcing other performers’ names soon. Could U2 or Idina Menzel be next?