The original space explorer, George Takei, has been busy lately. He’s premiering his documentary To be Takei at Sundance, and heading to Broadway with his new musical, Allegiance, based on his childhood in a WWII internment camp. But it’s the release of the animated film Free Birds on DVD that gave us a reason to sit down with the actor and boldly go where SheKnows has never gone before. 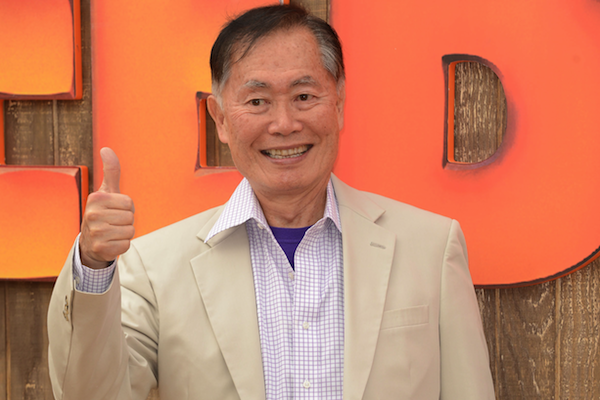 George Takei performs the voice of S.T.E.V.E. in the animated film Free Birds. We asked him what his mysterious acronym of a character was all about.

“S.T.E.V.E. is the time capsule that took modern-day turkeys, voiced by Owen Wilson and Woody Harrelson, back in time to visit the Pilgrims as they were preparing for Thanksgiving. I think it’s pretty obvious what their mission was.”

EXCLUSIVE VIDEO: Free Birds are fearsome fowl on the prowl >>

These fearsome fowl wanted to get turkey off the Thanksgiving Day menu. “They clearly didn’t succeed back then, but made a very important suggestion and last Thanksgiving, my nieces and nephews celebrated by eating pizza. They were very influenced by the movie.”

We asked if he thought Free Birds turned a lot of kids into vegetarians, but he said it more likely turned them on to pizza.

“It was a great commercial for pizza. Young kids are quite impressionable. I remember seeing Bambi as a kid — I was 7 or 8 — and I became passionately against hunting and still am. With the Blu-Ray of Free Birds coming out, there may be a whole new generation of kids eating pizza at Thanksgiving.” We’re sure Pizza Hut appreciates that. 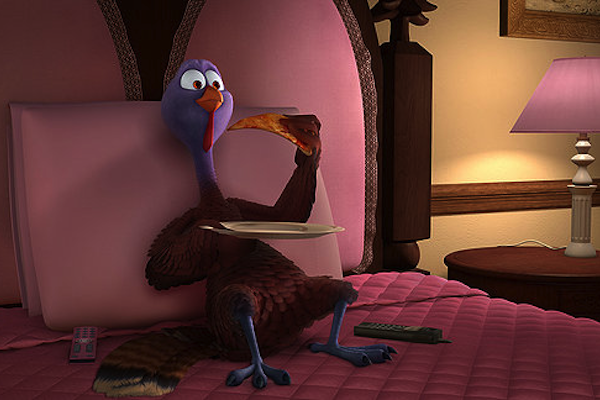 We asked Takei if he’d make some Oscar predictions, but it turns out he’s not allowed to publicly speculate due to being a voting member of the Academy. So while he can’t tell us who he voted for, we did ask his opinion on front-runner Cate Blanchett‘s odds of winning Best Actress in spite of the controversy over Woody Allen.

“I don’t let that interfere. What I’m judging is the artistic merit of the performance. An actor could have committed murder, but if he was brilliant…” Clearly, Takei believes in separating art from the artist, adding, “Think about some of those debauched painters. Their art would be totally worthless if you judged them by their private lives.”

When asked about 12 Years a Slave‘s chances of winning Best Picture, he said, “It was an historic film and last year, I was a very strong and enthusiastic supporter of Lincoln, but it didn’t win.” OK, so maybe American Hustle will win? We tried to read between the lines of his comments, but he remained pretty tight-lipped.

Of course, we had to ask the actor famous for playing Hikaro Sulu about Star Trek. Knowing that many Trekkies go to some unusual extremes, we asked him about his strangest encounter with a megafan.

“One young man had his name changed to James Tiberius Kirk and was working towards becoming a captain in the Air Force,” he said with a laugh. That’s commitment.

But probably the most exciting experience Takei can recall was when some of the Star Trek cast went to Cape Canaveral to meet the astronauts, or “real heroes” as Takei referred to them.

“They wanted our autographs and to take selfies with us. It was really a strange thing.” Makes perfect sense to us.

Another highlight of his career? “Getting to meet Neil Armstrong, the first man on the moon. That was an ecstatic experience to shake hands with the man who took the first step for mankind on another heavenly body. It was an incredible sensation.”

There’s even more coming up for George Takei. His autobiographical musical Allegiance will open next season on Broadway and he’ll also be featured in three episodes of The Neighbors on ABC.

When we thanked him for the interview, the actor said, “As we say on Star Trek, live long and prosper.”

Free Birds is out on DVD and Blu-Ray Feb. 4.