Bay learns to move on, Daphne finds herself with too many choices and Angelo comes clean to Regina in “It Hurts to Wait with Love If Love Is Somewhere Else.” 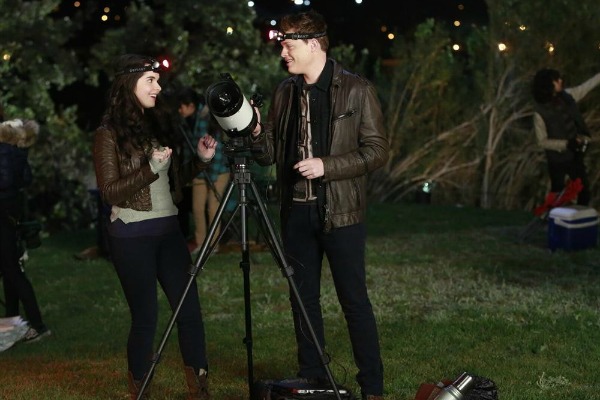 Anyone remember the prediction I made in my review of last week’s episode? The part where I said all the happiness from that episode probably meant that major amounts of drama were coming? Well, boy howdy, did this episode deliver.

I went into this episode thinking that maybe Bay and Emmett had a chance at rekindling their romance. I’ve always liked them as a couple and I’ve been hoping that they might find a way to get back together, but maybe I need to take the advice Emmett gave Bay and move on, too. He had a point about her constantly bringing up the cheating thing. Yes he did it, but he’s shown every sign of trying to move past it, not just in terms of apologizing to Bay but being a good guy overall.

Daphne, Daphne, Daphne. Talk about a girl in a super-complicated situation. It was bad enough to be pining for a guy who had a girlfriend, but then it got a lot worse from there. That party was extremely awkward and I was very happy to see that Jorge stuck up for her. Of course it would’ve been nicer if he’d told her all that great stuff in front of his family, but at least it was something. But just when he looked like the perfect guy for her, Campbell dropped the bomb that he broke up with his girlfriend. Logically, Daphne has an easy out if she wants it. After all, she and Jorge only had one date and one kiss. If she really likes Campbell, she could tell Jorge the truth and see what happens with Campbell. Will she do that? Somehow, I sincerely doubt it. I think we’re all in for a lot of longing glances between Daphne and Campbell.

It was good that Angelo finally came clean with Regina, but I’ve got a very bad feeling about his new business venture. Like Regina said, restaurants don’t always do well and it would be a real shame if he lost his money so soon after winning the lawsuit. As for Regina, things were looking up after she found that building, but then Wes had to go and ruin it by suggesting that he was going to kick out the little businesses in the area. Will Regina stop him or decide the job is more important? We’ll have to wait and see.

Switched at Birth preview: Will Emmett narc on his friend? >>

Bay advising Daphne to “resist the hotness.” Ah, if it were only that easy.

“Mandy. Again. She must have the world’s fastest thumbs.”

John busting out the old “Aaaay!” like Fonzie. Haha! I wonder how many people actually remember that reference.

Angelo not being able to get Wes’ name right.

“Off to the gay pride parade?”
“Very funny.”

Daphne getting in the chair to play Campbell. That was very cool. Well, until the awkward almost-kiss part.

Angelo reading Christy the Riot Act. Good for him!

Emmett pointing out that he needed the fresh start with Mandy, because Bay kept bringing up what happened with Simone.

Daphne finding out that Campbell broke up with Gretchen, right after she kissed Jorge.