Zoey Deutch is Hollywood’s next It Girl. She’s a favorite among teens thanks to appearances on The Suite Life on Deck and Ringer. Now she’s sinking her teeth into the fantasy film Vampire Academy. 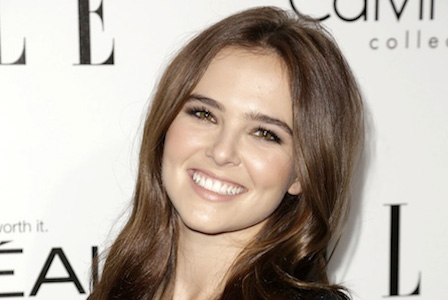 Zoey Deutch headlines Vampire Academy as Rosemarie “Rose” Hathaway. She’s a guardian in training whose sole purpose is to protect a peaceful race of vampires called Moroi. It sounds like a lot for a teenager to handle, but Rose is no weeping willow. She’s got it covered, as does Deutch.

The starlet made her television debut in 2010 with a recurring role on the Disney Channel’s The Suite Life on Deck. From there she played Sarah Michelle Gellar‘s troubled stepdaughter on The CW drama Ringer. After several years on the small screen, Deutch branched out into film, first with Beautiful Creatures and now Vampire Academy.

Deutch comes from an established showbiz family. Her mother, Lea Thompson, is a veteran actress who currently stars on ABC Family’s Switched at Birth. Last year, Deutch guest-starred on two episodes of the series. Her father, Howard Deutch, is a TV director with episodes of True Blood and American Horror Story to his credit.

Even though performing seemed like the logical path for Deutch to take, she claims she got into the business for other reasons. “I just wanted to do it because I’m an emotional wreck,” she joked to the Huffington Post. “And it’s really helpful for me to channel some sort of energy.”

Vampire Academy is the perfect project for Deutch, who gets to kick butt and crack jokes. Plus, the film’s director Mark Waters is one of her all-time favorites. “I was very nervous to meet him because I’m such a fan. I was like, ‘I love Mean Girls,'” Deutch confessed. “Working with Mark was amazing… He has an innate ability to understand comedic timing. He’s so good at that.”