There’s going to be even more blue in the Cutler household! Kristin Cavallari announced the sex of her second child on Saturday. 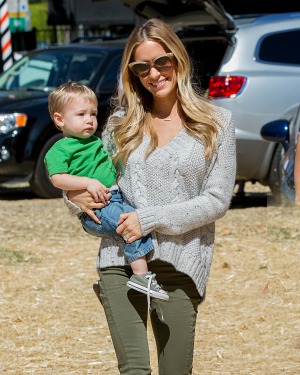 Kristin Cavallari was going to wait to tell the world about the gender of her second child, but it looks like she couldn’t wait. On Saturday, the former reality star shared on Instagram that her second child was another boy.

She wrote, “We decided to announce that… we’re having another boy!! We couldn’t be more excited!”

Kristin Cavallari: The Hills was so fake >>

The 27-year-old and her husband, Jay Cutler, are already parents to son Camden, 1. She spoke with ABC News back in the late fall about the possibility of having a second boy.

Cavallari said, “Yeah, I feel the exact same, both my pregnancies. I’m just really tired in the first trimester, then once I hit the second trimester, I start to snap out of it a little bit. My cravings have been the same. I don’t know if that’s any indication that it’s a boy or what, we’ll see.”

That certainly didn’t stop her from dreaming about having a girl and a bit of pink around the house.

“Of course I want a little girl, I think it would be a ton of fun, but a boy would be great too. Then Camden would have a little buddy, and I’d still be the girl of the house,” said the former Hills star.

So it looks like the house will be filled with trucks, overalls and lots of footballs for the boys who might take after their Chicago Bears dad. Either way, it sounds like Cavallari is thrilled about her baby boy.