Miley Cyrus sat down with Ronan Farrow to explain what inquiring minds want to know: why she hates kids, why she has cultivated her controversial image and why she’s always half-naked. 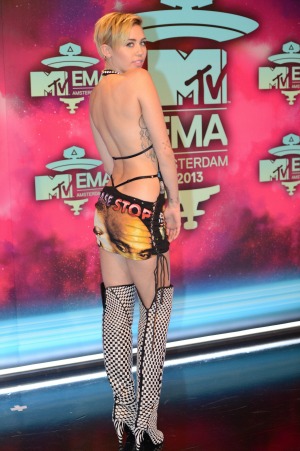 If there is one thing Miley Cyrus is not, it’s cagey — and the star proved her outspokenness once again in a new interview with W.

Chatting with Ronan Farrow — himself in the news again of late because of his own famous parents — the “Wrecking Ball” singer breaks down a few personal issues, like why she’s not a huge fan of kids, why she cultivated her current image and why that means she is half-naked all the time. Added bonus: Anyone who accuses her of prejudicial exploitation or cultural appropriation is just a jealous hater.

Miley & Madonna team up for Unplugged >>

“I don’t love kids,” she told Farrow. “They’re so f***ing mean. Sometimes I hear kids with their parents, and I want to go over and, like, smack them myself… Like if they meet me, they’ll be like, ‘Mom, don’t you know how to use an iPhone? Like, can you take the picture?’ I’m like, ‘Dude, if I ever talked to my mom like that when I was a kid, I would have had no phone, no computer, no TV, no anything.’ And so, yeah, kids are just mean.”

Cyrus also insisted that rather than being just some crazy former child star running around naked after years of Disney control, her new controversial image is actually carefully crafted to let young girls know they don’t have to be pigeonholed into looking like Taylor Swift or Katy Perry.

“I just don’t get what half the girls are wearing. Everyone to me seems like Vanna White. I’m trying to tell girls, like, ‘F*** that. You don’t have to wear makeup. You don’t have to have long blonde hair and big titties. That’s not what it’s about. It’s, like, personal style.’ I like that I’m associated with sexuality and the kind of punk-rock s*** where we just don’t care. Like Madonna or Blondie or Joan Jett — Jett’s the one that I still get a little shaky around. She did what I did in such a crazier way. I mean, girls then weren’t supposed to wear leather pants and, like, f***ing rock out. And she did.”

But being naked is second nature to her anyway — she explained that summers growing up were spent running around her family’s 500-acre Tennessee farm like any other country kid, without a care in the world. “We never were inside, and we never wore shoes,” she recalled. “I think it’s why I like wearing no clothes so much and I’m always naked.”

Cyrus also claims that people who criticize her use of black women and little people in her stage shows as exploitative are just jealous haters.

“I don’t give a s***. I’m not Disney, where they have, like, an Asian girl, a black girl, and a white girl, to be politically correct, and, like, everyone has bright-colored T-shirts. You know, it’s like, I’m not making any kind of statement. Anyone that hates on you is always below you, because they’re just jealous of what you have.”

Got that, haters? You are totally jelly.

Read the complete interview with Miley Cyrus at WMagazine.com.