Seinfeld at the Super Bowl! The eagerly anticipated cast reunion finally happened, but was it all that fans had hoped for? 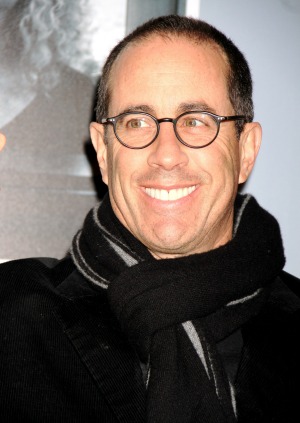 The eagerly anticipated reunion of the Seinfeld cast finally happened Sunday night at the start of the Super Bowl XLVIII halftime.

Jerry Seinfeld had been dropping hints in the previous week that the secret project to promote his new web series, Comedians in Cars Getting Coffee, could have a spot at the Super Bowl.

During an interview with WFAN radio — after Seinfeld had been spotted filming with Jason Alexander — he revealed that the cast would be getting back to together to film an exciting one-off scene very soon.

Fans had been waiting for this moment for 15 years, but the unveiling of the commercial left many rather disappointed.

The promo in many ways lacked entertainment, which is what the viewers wanted during halftime.

The hit NBC comedy had once made Tom’s Restaurant in Manhattan famous, and staying true to their characters, it was here that Jerry Seinfeld and Jason Alexander reunited.

In a much-too-short skit, Seinfeld and Alexander’s characters, Jerry Seinfeld and George Costanza, were engaged in a conversation about why they had been left out of the annual Super Bowl party at the Wasserstein’s.

But the plot had a little twist — it turns out that Jerry was invited after all, leaving only poor George out of the festivities because of his terrible party manners and a bathroom blunder: He “availed himself of the toilet in their master bedroom.”

Of course no skit would be complete without the inevitable “Hello, Newman.” Cue Wayne Knight whose antagonist character, Newman, descends upon George just as he bids farewell to Jerry.

So why did the Seinfeld reunion fall flat for so many fans? Is it because the generation that once loved the hit ’90s series growing up is now older? Or was it déjá vu as the relatively bland dialogue resembled the 1998 series finale?

On the other hand, it was great to have them back again (at least three of them), even if it was for only 90 seconds.

Besides, if the reunion was not all you hoped it would be, then Seinfeld has another chance to impress you. The new web series Comedians in Cars Getting Coffee, available from Crackle, has already been receiving a lot of positive feedback, with more than 25 million streams and some seriously funny additions to the cast, including Jay Leno, Louis CK and Tina Fey.