Kim Kardashian is sporting her famous brown hairdo once again — could this mean that the reality TV star’s dreams are finally coming true? 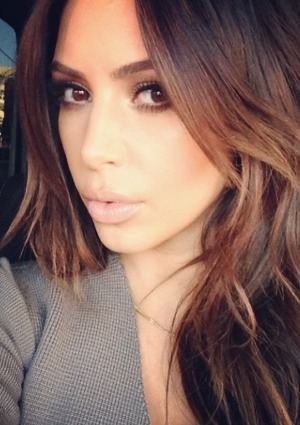 When your name is Kim Kardashian, even your hair manages to make headlines.

Fans were excited when the reality TV star opted to change her luscious brown locks for a blond hairdo after the birth of her daughter, North. But her hair is back to the familiar shade of brown now. The only question is, why?

It is no secret that Kardashian would love to grace the cover of Vogue magazine and her fiancé, Kanye West, has been trying to pull all the strings. So could the Keeping Up with the Kardashians star be about to get her big break?

The “Bound 2” rapper is close pals with Vogue magazine’s editor-in-chief, Anna Wintour, and the pair have apparently recently exchanged words regarding Kardashian’s cover — or lack thereof.

According to Radar Online, West was very displeased that his lady had been overlooked for the February cover, which Girls star Lena Dunham landed.

A source allegedly revealed to Radar Online, “Kanye thinks that Kim has a much bigger fan base and appeal than Lena.

“To Kanye, it’s insulting that his friend Anna is still refusing to even consider putting Kim on the cover of Vogue. He thinks Anna is listening to a bunch of ‘know-nothing’ corporate haters, as he put it. He’s upset that Anna isn’t willing to do him this personal favor and put Kim on the cover.

“Kanye knows that it’s always been a huge dream of Kim’s to be on the Vogue cover and Kanye wants to make it comes true. If nothing else, Kanye is persistent.”

Could all of that persistence have paid off? For now, we will just have to wait and see. In the meantime, Kardashian is pleased to flaunt her new honey-tinged brunette look. Taking to Instagram, she posted a pouting picture of her beautiful brunette hair, which she simply captioned, “I’m back.”

According to Us Weekly, a source close to Kardashian revealed why the 33-year-old beauty changed her hair, saying, “Tracey Cunningham did it. She’s amazing. Kim just wanted to change it up! It seems like everyone went blonde, so it was time to change it up.”