Bruno Mars was an interesting choice for the halftime show at the Super Bowl this year, but he was thrilled to be asked, and he proved his talent to the world. 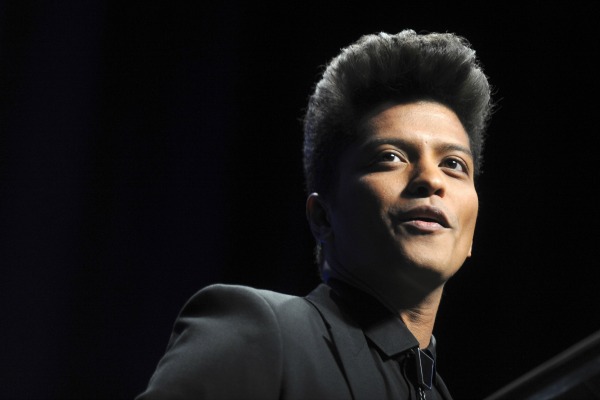 Bruno Mars may not have seemed like the most obvious choice for this year’s Super Bowl halftime show, but he sure rose to the challenge.

Look who Billboard crowned as 2013’s artist of the year >>

The show started in a darkened stadium with silhouetted children singing. Mars appeared on a moving platform on a drum set, rockin’ away. The singer always seems to create his own fashion from old themes, and he makes them stylish again. Pairing his gold jacket with a matching backing band is exactly what we know of the singer, and it was perfect.

He sang his hits like “Locked Out of Heaven,” “Treasure” and “Runaway Baby.”

Mars has been compared to the likes of Michael Jackson, and he created the same kind of thrill that Jackson once did in a stadium full of football fans. The dancing and the matching outfits of his band created a vibe like early Motown.

Mars led “Runaway Baby” into “Shout” by the Isley Brothers, and then he moved into the Red Hot Chili Peppers‘ “Give It Away” when the latter band appeared onstage. The singer had previously said the Chili Peppers would be joining him onstage, and they began with arguably their biggest hit.

The collaboration featured musicians from two different worlds, but it showed how the world of music always seems to fit together perfectly.

The song led into a tribute by members of the U.S. armed forces, who left messages for their family members back home. That led into Mars’ hit “Just the Way You Are.”

Since it was announced, Mars has been ecstatic about being able to perform at the big game. He continued to tweet about it all the way up to his performance.

Mars, a native of Hawaii, previously said how cold he had been during rehearsals in New Jersey.

“The microphone turns into a Popsicle and all these things you don’t really think about going into it,” he told MTV about the cold-weather game.

The show ended with fireworks around MetLife Stadium. It was a perfect ending that likely changed the minds of all those who questioned the choice of Bruno Mars as the halftime performer.