Patrick Stewart and Sir Ian McKellen have two of the best accounts to watch on Twitter, but they may have topped even themselves with their Super Bowl tweet. 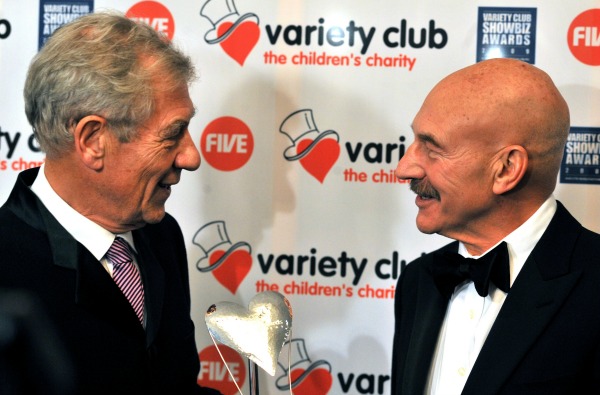 Ian McKellen and Patrick Stewart may have the most adorable friendship on Twitter, and definitely the most fun-to-watch bromance. The fellow Brits often post photos with each other, and often referencing things going on in popular culture.

New X-Men: Days of Future Past teaser has us X-cited >>

But this time, they may have trumped all their past efforts. The friends appear in the new photo in jerseys of the two teams for this year’s Super Bowl — Stewart in a Seattle Seahawks jersey and McKellen in a Denver Broncos jersey.

But that wasn’t even the best part of it all. Stewart and McKellen are holding a soccer ball. Or, in most of the rest of the world, a football!

The numbers on their jerseys represent the quarterbacks of each team: McKellen’s 18 is the Broncos’ Peyton Manning and Stewart’s 3 represents the Seahawks’ Russell Wilson.

The Hobbit: The Desolation of Smaug : Book vs. movie >>

McKellen and Stewart starred together in X-Men: Days of Futures Past, and have been posting photos of themselves on Twitter for a while now. They obviously have an amazing friendship, and McKellen actually even served as officiant at Stewart’s wedding back in September.

In March, he revealed he was given the honor of officiating, telling Jonathan Ross, “I’m going to marry Patrick. How else do you put that? I’m going to officiate at his wedding.” In September, he posted a photo showing he had been ordained as a minister.

The photos the friends post on a regular basis show not only what an amazing friendship they have, but their sense of humor as well. So if you’re wondering who is going to win the game this weekend, or even the promotion behind the game, Stewart and McKellen already have them all beat.