The makeup! The hair! The fashion! This music video is an explosive compilation of fierceness and sexiness. Better turn that AC on, because wherever you are, it’s going to get steamy in a few moments. 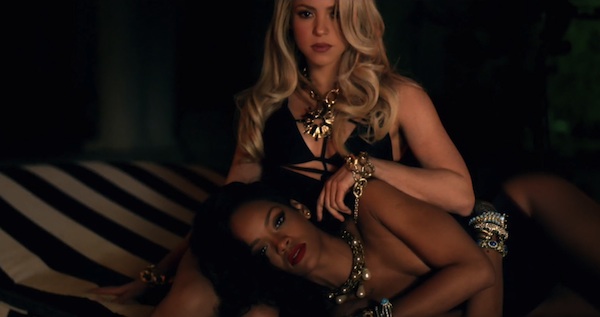 What do you think of the song “Can’t Remember to Forget You”?

I think it’s a pleasant pairing (I mean, it’s not like you’d expect firecracker Rihanna and sweet Shakira to collaborate all the time), and the tune is surprisingly addictive, with its island-like melody.

But the video?! ¡Ay dios mio! Shakira, you are back to your “Hips Don’t Lie” and “La Tortura” days after all.

Have you seen Shakira’s latest commercial? It’s almost like a Super Bowl ad >>

Rihanna actually plays it more coy (if you can imagine) in this vivid video, and Shakira takes on a ferociously feline and sex-kittenish approach to enthralling viewers. Her gyrations and her assets are giving this new mama a new realm of credit.

Rihanna isn’t known for being subtle — I mean, have you seen her hair here? >>

Viewers are transported to a dungeonlike zone where you cannot peel your eyes away from the stars as they mingle and caress each other and showcase their affinity for dancing seductively. But I am a willing prisoner, so much so that I hit “repeat” a few times.

For some, this video will definitely incite quite a few girl crushes, and for the others who are familiar, it will entirely set ablaze the obsessions many other videos already have sparked.

It’s an interesting portrayal, because it sends audience expectations into a tailspin. While you are more inclined to assume (based on Rihanna’s well-known sexual prowess) that she would take the reins of a sexual anthem, Shakira proves to be the one in charge. While it’ll take a few people by surprise, her cute face and smoking bod ascend to a new level with her come-hither eyes and beckoning hip moves. Sort of makes her a naughty Colombian next door. (Get it — “girl-next-door”?)

Rihanna takes a more vulnerable but still sexually charged backseat to Shakira, but she still holds her ground. You won’t forget Rihanna, either. And I’ll give you a hint as to why — there’s a bed scene, and her hands go places I almost had to turn away from looking at!