Amanda Knox was again convicted by an Italian court for the murder of her roommate back in 2007. But she is speaking out, and she’s saying she will fight it to the end. 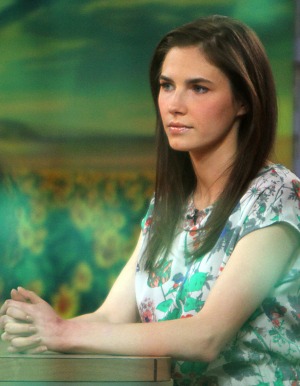 Amanda Knox was convicted of murder in an Italian court on Thursday, Jan. 30.

She spoke out Friday morning on Good Morning America, calling it “not right and not fair.”

Amanda Knox: A timeline of murder >>

“I couldn’t believe what I was hearing,” Knox told GMA (via People). “I did not expect this to happen. I really expected so much more from the Italian justice system. They found me innocent once before.”

On Thursday, Knox was convicted of the 2007 murder of her roommate, Meredith Kercher. Knox was sentenced to more than 28 years in prison, but the 26-year-old promised she would not return to Italy unless forced to do so.

“I will never go willingly back to the place where… I’m going to fight this to the very end,” she said. “It’s not right, and it’s not fair.”

Knox has already spent more than four years in prison, but she was released after an appeal in 2011. A retrial for her and her ex-boyfriend Raffaele Sollecito was held after it was ordered by the Italian Supreme Court.

According to Sollecito’s lawyer, he was in northeast Italy because his current girlfriend lives there. Police said he was found because the hotel he was staying at required him to give them an ID when he checked in. Police stamped his passport showing he cannot leave Italy. The Italian court did not order him to be detained, but they wanted to make sure he wouldn’t leave the country.

Sollecito was sentenced to 25 years in prison by the court and was reportedly cooperating with authorities.

Meredith Kercher’s family released a statement after the new conviction.

Her sister, Stephanie Kercher, said, “I think we are still on the journey of the truth and it may be the fact that we don’t ever really know what happened that night, which will be something we have to come to terms with.”