Emma Roberts has a successful career and loving fiancé, but it took her a while to convince him to go out with her. 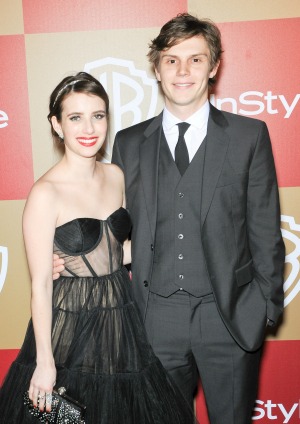 Emma Roberts and new fiancé Evan Peters have appeared completely adorable and in love since they started dating, but their relationship wasn’t always that way. Roberts and her American Horror Story: Coven costar met on the set of Adult World, but Roberts says Peters wasn’t automatically smitten with her.

“On set, I was like ‘Oh yeah, we’re totally going to date,’ and I would try to flirt with him, which ended up looking like I had something in my eye,” Roberts told Chelsea Handler via People. “He literally didn’t speak to me the entire movie, like [he] thought I was so weird.”

The actress wasn’t worried about Peters’ lack of affection, especially because of her look and character for the film.

“I have no makeup on, it looks like I cut my own hair off,” she said. “I was not exactly looking cute to get a man.”

Roberts said Peters finally did make a move, by texting her. After she was cast in his show, American Horror Story, things moved even faster.

The actress was born into a very famous family — her aunt is Julia Roberts and her father is Oscar-nominated actor Eric Roberts — and she knew well enough to keep the relationship quiet for a while. They were first rumored to be dating back in summer 2012.

“I’ve grown up in a business where we’re taught to think that relationships don’t last, and that people are supposed to be married a bunch of times,” Roberts recently told Nylon. “But I come from the school of getting married once. Everyone kind of rolls their eyes at me, but I still believe in the romantic movie outcome.”

The couple announced their engagement earlier this month. Adult World follows Roberts’ character, a poet who works at an adult film store, and opens Feb. 14.