Who knew Charlize Theron was so funny? In Seth MacFarlane’s latest film, A Million Ways to Die in the West, she flexes her comedy muscle. 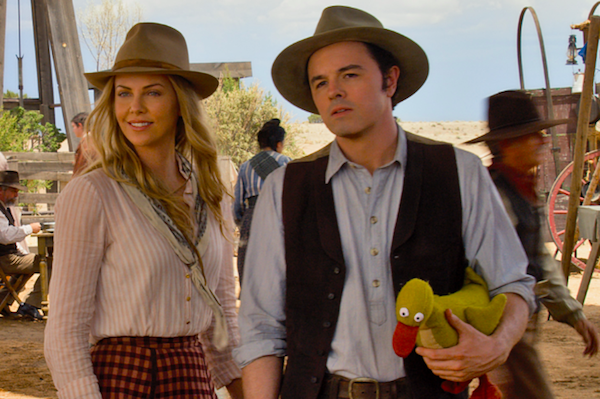 From the creator of Family Guy comes A Million Ways to Die in the West. Following the success of Ted, Seth MacFarlane‘s back with another live-action adventure. This time, he tries his hand at a period piece in which cowboys rule the streets.

MacFarlane directs, produces, co-writes and stars in the film. But he’s not a gun-toting hero. He plays a cowardly sheep farmer named Albert who encounters a beautiful woman played by Charlize Theron. They quickly become friends as she tries to help Albert face his fears. After spending so much time together, they eventually fall in love.

Unfortunately for Albert, his new lady is already married. Her estranged husband rides into town and Albert’s newfound courage is put to the test. He also has to deal with his manipulative ex-girlfriend (Amanda Seyfried) and her new beau (Neil Patrick Harris).

The film co-stars the hilarious Sarah Silverman, who plays a prostitute and Liam Neeson as a notorious outlaw. Giovanni Ribisi rounds out the cast as Albert’s naive best friend. The plot for A Million Ways to Die in the West is pretty straightforward. As expected, there’s a lot of death. People lose their lives in the most creative and ludicrous ways.

The following trailer is restricted, which means it’s filled with curse words and graphic footage. At one point, someone’s killed by a giant block of ice.

A Million Ways to Die in the West hits theaters May 30.