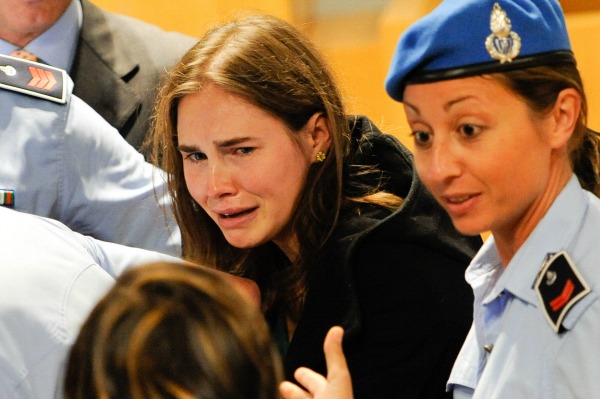 Nov. 1, 2007: Meredith Kercher murdered in the apartment she shared with Knox and two Italian women. She was sexually assaulted and stabbed to death. A knife and her bra were the sole pieces of physical evidence found and would become major points of contention in the trial.

Nov. 6, 2007: Knox arrested and charged with Kercher’s murder, along with Sollecito. They are held in prison under “cautionary detention” for the duration of their trials.

October 2008: Drug dealer Rudy Guede, who Kercher met just weeks before her death, is convicted of sexual assault and murder. He is sentenced to 16 years under appeal after it is determined he did not act alone.

Dec. 5, 2009: Knox and Sollecito are convicted of murder, sexual assault and simulating a burglary. Knox is sentenced to 26 years, Sollecito 24. She is also convicted of slander for falsely implicating a bar owner in the murder.

June 1, 2010: Prosecutors open another case against Knox for allegedly falsely implicating police by accusing them of mistreating her while in custody, including accusations they hit her on the head and denied her food, water and an interpreter.

Oct. 3, 2011: Knox and Sollecito have their convictions overturned by an Italian appeals court. They are found innocent and released from prison immediately. Knox returns home to Seattle.

Sept. 18, 2012: Sollecito releases a book called Honor Bound in which he says despite his assertion that both he and Knox are innocent, her behavior towards him at the police station made him “uneasy.”

March 26, 2013: The Italian Court of Cassation overturns the acquittal citing that certain evidence was overlooked and questions remained unanswered. Knox and Sollecito are ordered to be retried.

April 30, 2013: Knox’s memoir, Waiting to Be Heard, is released. In it she maintains her innocence and explains her false confession to police.

Jan. 30, 2014 Knox and Sollecito are again found guilty of the murder of Kercher. While Knox calls the verdict frightening and sad, she is unlikely to face extradition to Italy according to legal experts.

Tell us: Do you think Amanda Knox is guilty or innocent?