Tori Spelling has been very busy trying to keep her family together after husband Dean McDermott entered rehab for personal issues. 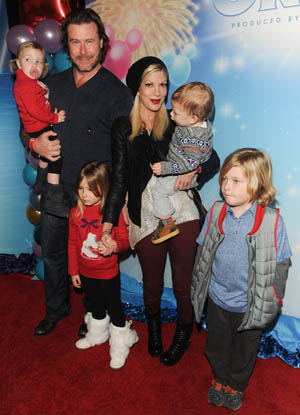 Not only is Tori Spelling busy with all her business endeavors, but she’s also hard at work trying to keep her family in one piece after her husband, Dean McDermott, entered rehab.

While Spelling makes sure that her blog ediTORIal stays up to date with DIY projects, style and recipe updates, the mom of four is also striving to keep her marriage intact after McDermott went in for treatment. While the reason for the 47-year-old’s rehab stay was credited to personal issues, it is rumored to be linked to an extramarital affair.

But, Spelling seems to be trying her hardest to keep things together and functioning after having vowed to never break up her clan.

“She once said she would never split up her family, and she seems to mean it,” a source close to Spelling told People magazine. “However, after the latest cheating rumors, Tori must have put her foot down. She likely gave him an ultimatum.”

Since Spelling is the one responsible for the finances and supporting the family, she’s under lots of pressure, another source told the magazine. Plus, with her constant drive to keep McDermott happy even through four pregnancies and being sick, she’s crushed over his alleged infidelity. “The fact that, after all that, he cheated on her so publicly, is devastating.”

However, a pal close to the couple said that McDermott is feeling bad about what he’s done and wants things to work out with Spelling as well. “He’s a good person in so many ways and he truly loves Tori,” the source continued.

“She’s not going to give up without a fight, and neither is he,” the source added. “Her family was always her dream come true, and it’s going to be hard for her to give up that dream.”